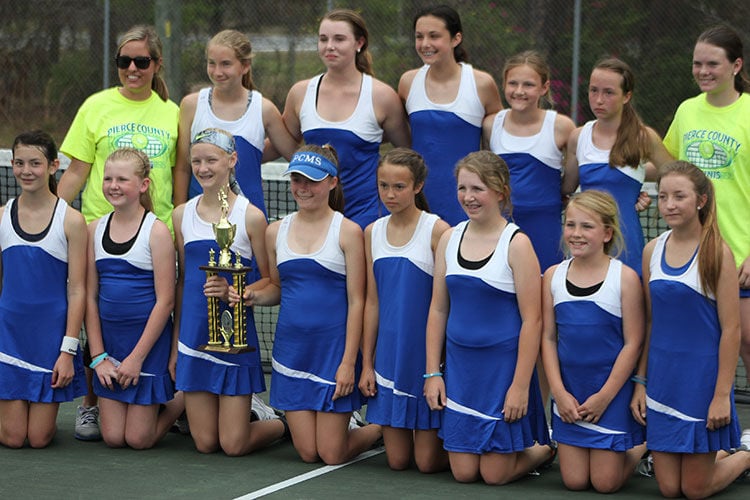 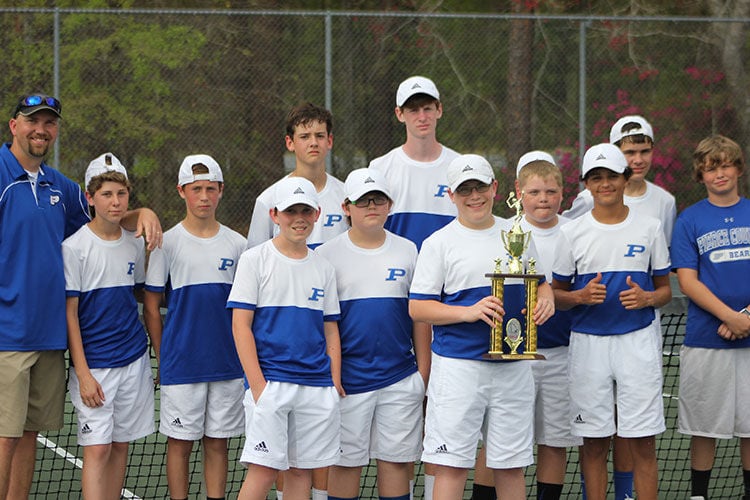 The Lady Bears (9-2) fell 3-1 to Brantley County Middle School in the championship match. The victory by the Lady Herons was their fourth consecutive conference title. PCMS has played in the championship six times in the last eight years with five runner-up finishes and one title (2012).

The Bears (9-2) also lost a 3-1 decision to Appling County Middle School finishing a second straight year as the runner-up. PCMS has played in five of the past seven title matches winning just once (2010).

“Championships are always our goal,” said head coach Brandon Carlson. “We had no players returning from last year’s championship match, so I am proud of this team for growing up fast this season.”

PCMS opened the tournament beating Bacon County Middle School 3-0 in the quarterfinals. The Bears downed Brantley Middle 3-1 in the semifinals.

Brantley Middle split two of the three singles matches that were completed and swept the doubles competition to get the win.

The Lady Herons’ No. 1 doubles team of Jordan Harper and Molly Scruggs were first off the court winning an 8-4 decision over Kennedy Sikes and Auri Gunter. The next match to end was the No. 3 singles with PCMS’s Hannah Thigpen notching an 8-5 win over Madelyn Alligood.

Brantley Middle’s No. 2 doubles team of Lindsey Herrin and Sydney Strickland followed with an 8-6 victory over Chloe Hersey and Laura Kate Bennett. The Lady Herons got the team victory when No. 1 Zoie Page doubled up Lily Theis 8-4.

BCMS’s Kailey Lovell was leading 6-3 over Rachel Gay at No. 2 singles when the match was called.

A loss in a tie-breaker in a match that was 2-1 and still up for grabs spoiled Pierce Middle’s title hopes.

Appling Middle jumped out to a quick 2-0 lead winning at No. 2 doubles (Blake Cantrell and Ramsey Hall) and No. 3 singles (Carter Smith).

Joe Hopkins, who finished the year unbeaten, helped PCMS pull to 2-1 with an 8-5 win at No. 1 singles.

The No. 1 doubles team of Ethan Carlson and Hugh Saussy lost a heartbreaking 9-8 (8-6) decision. The duo had a 6-0 advantage in the tie-breaker.

Colton Wright was down one game at No. 2 singles when his match was called.

The Bears ended Brantley Middle’s five-year reign as conference champions with the victory.

Hopkins beat Brent McLeod 8-5 at No. 1 singles and Smith posted an 8-3 win over Benji O’Neal at No. 3. Wright was leading his match 5-3 when the match was stopped.

PCMS got the victory splitting the doubles matches. Carlson and Saussy fell 8-5 to Bradson Bowers and Dalton Williams at No. 1 with Hall and Cantrell beating Grayson Horne and Branson Coblentz by the same score at No. 2.

Pierce Middle opened the tournament with an easy win over the Red Raiders last Thursday.

Only two matches were completed with the other win coming via forfeit at No. 3 singles. Wright rolled to an 8-0 win over Blain Bowles at No. 2 singles and the No. 1 doubles team of Carlson and Saussy were 8-0 victors over Himil Patel and Paxton Wilcox.

Hopkins was in control of his match at No. 1 singles and the No. 2 duo of Cantrell and Hall were leading when the match was called.

Making the most of workplace benefits

Entrepreneurial opportunities in the restaurant industry