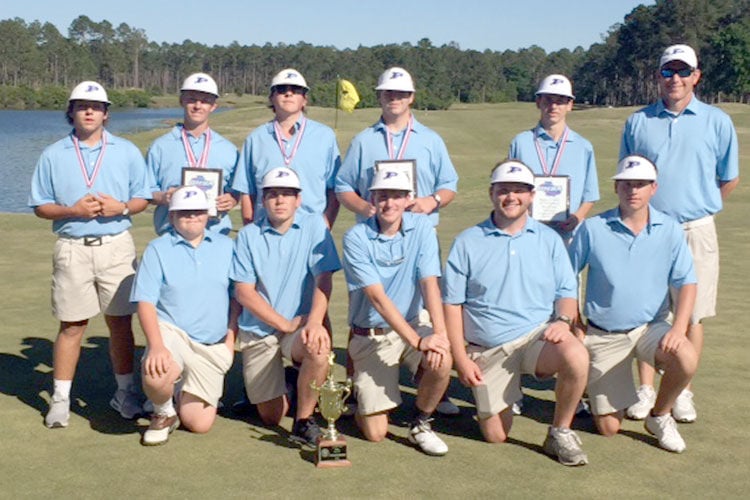 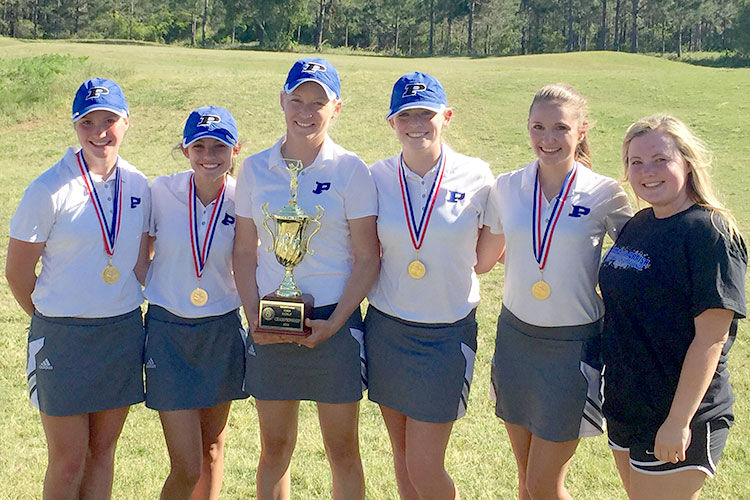 The Pierce County Bears captured the Region 1-AAA golf title Monday afternoon in the six team tournament at The Lakes at Laura Walker.

Pierce’s 32-shot victory after posting a 315 team score was their fifth consecutive in region tournament play and fourth straight in Region 1 (one in Region 2-AA).

“Today was a great day for our golf program,” said head coach Stuart Stipe, “with both the boys and girls winning region titles. This was our fifth region championship in a row and that is compliment to our program and the tradition we have here in Pierce County. Winning the region tournament is “A” goal, but not THE goal.

“The region tournament is where you punch your ticket to the “Big Dance”. We did that today and we are excited. We did not play as well as I would have hoped, but hopefully there were lessons learned.”

“I am happy for Jake winning low medalist,” Stipe said. “It’s the second year in a row he needed extra holes to claim the prize.”

The region title clinched a berth in the Class AAA state tournament, which will be held Monday, May 16, at Gordon Lakes Golf Club at Fort Gordon in Augusta.

“Each year we start out with the end in mind and that’s a state championship,” said Stipe. “Everything we do from practice to tournaments is to help prepare us for that day.”

Harvard and Jacobs were among six players that made the all-Region squad. PCHS had two others make the team in Zac Thornton and Kole Kicklighter, who shot 76 and 79 respectively.

Brantley County’s Jack Johnson, who shot 79 and recorded a hole-in-one on the Par 3 17th hole, joined Jacobs as representatives for the Herons.

Southeast Bulloch’s Hunter Higgs posted an 83 to round out the squad.

For the Bears, they received an 86 from John Ben James, a 90 from Emmett James and a 91 from Ty Metts to go along with the three rounds in the 70s.

PCHS played in the 16-team Golden Isles Invitational on St. Simons Island at the Retreat Golf Course finishing fifth with a 325 team score. Host Glynn Academy shot a 313 to capture the event.

“This is a great test right before our region tournament,” said Stipe. “The breeze that pushed the weather system through last week was very much a factor. You could see about 40 of the 50 stars on the American flag flying above the clubhouse.”

Thornton garnered medalist honors with a two-over-par round of 74 with John Ben James adding a 76. Harvard (86), Kicklighter (89) and Metts (89) rounded out the team.

“I’m really happy for Zac for winning low medalist,” said Stipe. “ High school golf is a TEAM sport played by individuals. Today, Zac was the best of the individuals.  He beat some really good golfers today.

“John Ben also had a good day. Jake, Kole and Ty all struggled. It was not fun to watch.”

Freshman Sloan Lanier carded a three-over-par round of 75 to claim medalist honors and lead the Pierce County Lady Bears to the Region 1-AAA title Monday.

Lanier’s round was five shots better than the second-best score of 80 posted by Rachel Wohn of Savannah Arts Academy.

The Lady Bears shot a 255 three-person team score to win by 37 shots in the five-team tournament at The Lakes at Laura Walker. Pierce’s win clinched a berth in the Monday, May 16, Class AAA tournament at Pointe South Golf Club in Hephzibah outside of Augusta.

Sophomore Kayla Petrowicz followed Lanier’s lead with an 89. Freshman Kelsey Russell added a 91 and junior Anna Tiller finished with a 103.

“I am so proud of these girls,” said head coach Erica Grady. “We have come such a long way since the beginning of the season. This is the first time we have had a low medalist at the region tournament in my three years. I am very proud not only of Sloan, but of THIS team. Today is a great day to be a Lady Bear.”

Brantley County, the tournament host, finished second with a 292 team score. Southeast Bulloch was five shots back at 297. Dodge County and Appling County rounded out the field with scores of 331 and 336 respectively.

The Lady Bears will travel to Columbus this weekend to compete in the Maple Ridge Junior Girls Classic.

Financial anxiety weighing on your mental health? Try these tips

Recognizing Those Using Creativity to Give Back [Video]