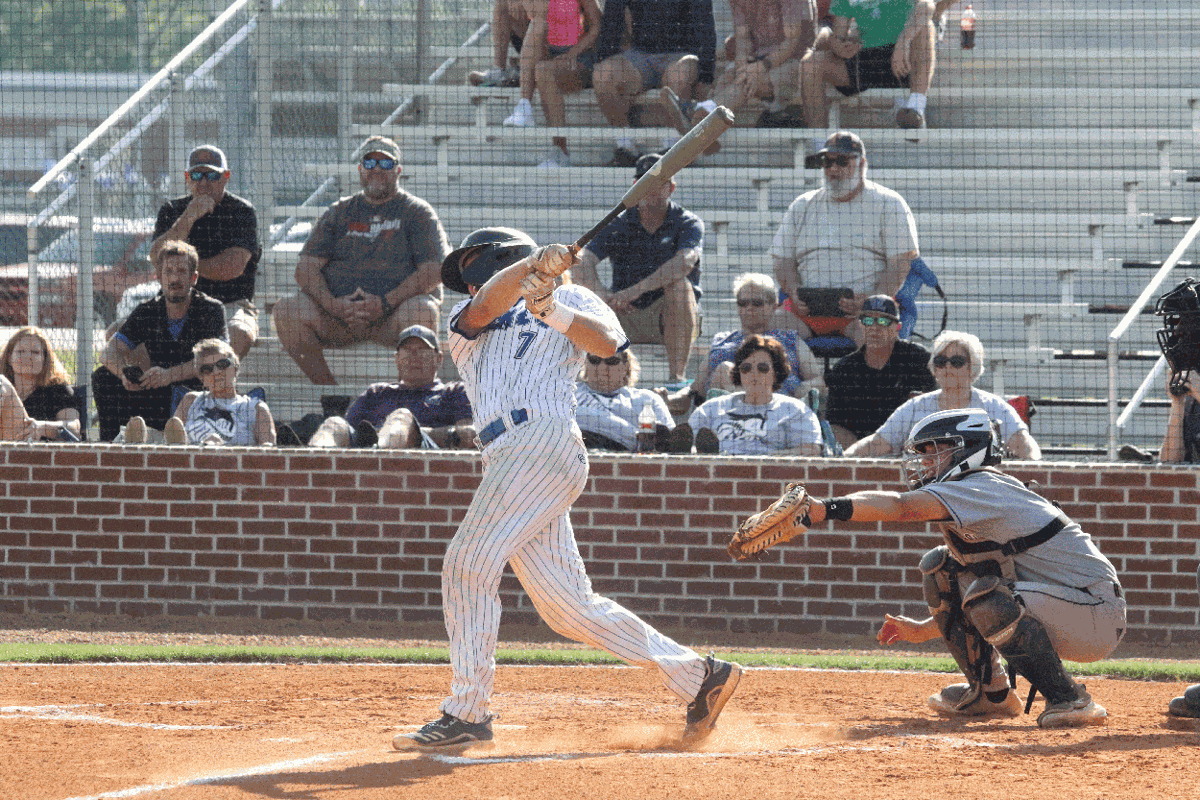 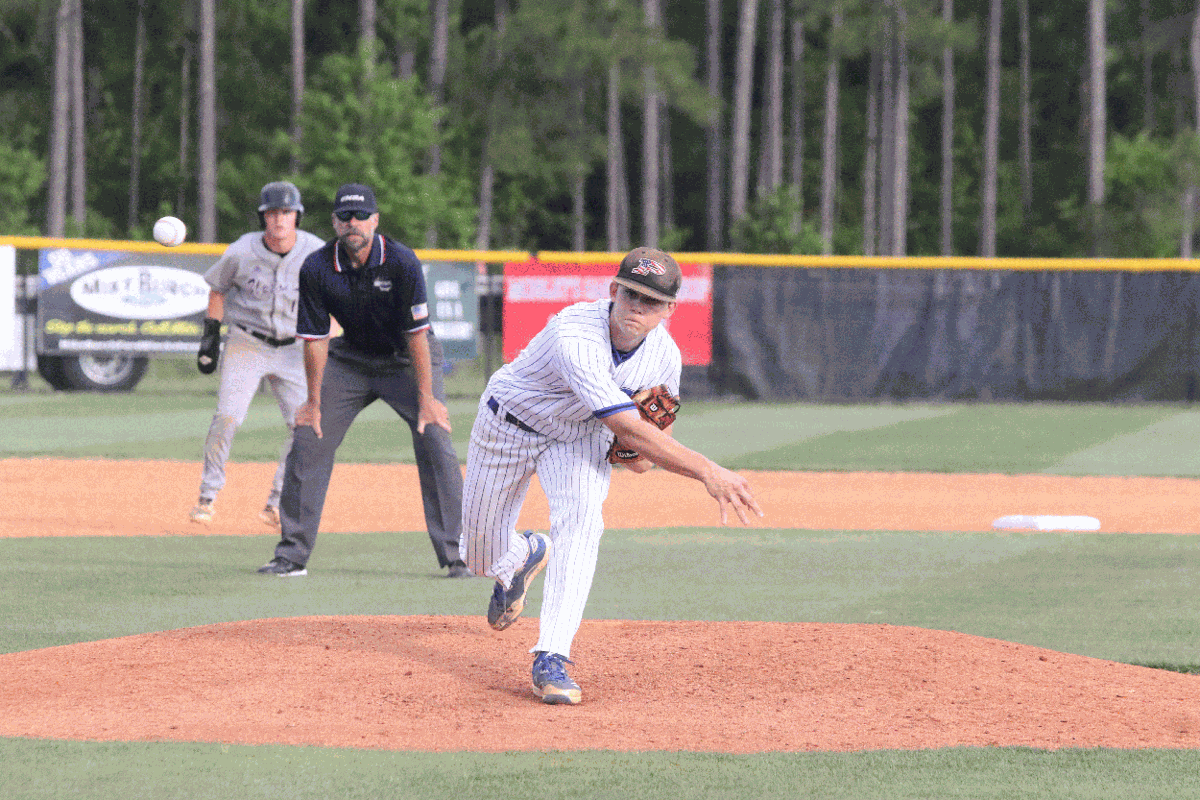 Hoke Skipper, who recorded a complete game, delivers a pitch during the third inning of the series opener against Upson-Lee.

Hoke Skipper, who recorded a complete game, delivers a pitch during the third inning of the series opener against Upson-Lee.

Hoke Skipper’s complete game shutout in Game 1 and a four-run rally in the sixth inning of Game 2 helped Pierce County sweep visiting Upson-Lee in the second round of the Class 3A playoffs.

The Region 1 champion Bears (26-5), winners of 10 straight games, entered the best-of-three series ranked No. 1 by MaxPreps and No. 4 by the Atlanta Journal-Constitution. The Region 2 third-seed Knights (17-11), who had won six straight games, were ranked 16th by MaxPreps.

Pierce County traveled Monday to Gainesville to face Region 1 champion North Hall (27-5), ranked first by the AJC and third by MaxPreps. The Trojans have won 16 of 17 with the only loss coming in Game 1 of the second round series against Hart County.

Skipper made a first inning run stand up with the Bears breaking the series opener up with a four-run fifth.

Skipper escaped first inning trouble with an inning-ending double play, one of three turned by the PCHS infield, after surrendering a leadoff single and a one-out single.

The Bears capitalized on the first of four errors committed by Upson-Lee. Davis Green (2-for-3) singled, moved up on a passed ball, advanced to third when Skipper’s sacrifice bunt was misplayed putting runners on the corners. Knox Bennett (1-for-3) lifted a sacrifice fly to right plating Davis for a 1-0 lead.

The Knights strung together a pair of two-out singles in the second before the third out was recorded. PCHS was denied in the bottom of the inning when Collin Jarrell (1-for-2) was gunned down at the plate, the first of four such instances in the doubleheader.

Jarrell was hit by the third offering in the second. Brett Tuten (2-for-2) executed a sacrifice bunt to move Jarrell into scoring position and Green followed two batters later with a single. Jarrell was called out on the bang-bang play at the plate.

The Bears left two runners on in the bottom of the inning with Drew Starling (1-for-3) reaching on a two-out error and Jayden Crews (1-for-3) following with an eight-pitch walk.

PCHS turned another inning-ending double play in the fifth after the Knights got a leadoff single.

The Bears followed with a four-run uprising in the bottom of the inning with five hits. Bennett singled with one out and Starling followed one-pitch later with a single.

JReid Phillips (1-for-3) laced a two-out, two-run first-pitch triple pushing the margin to 3-0. Jarrell followed with a run-scoring single. Tuten’s bloop single to right and an error on the rightfielder allowed Jarrell to score from first extending the lead to 5-0.

After Upson-Lee stranded a runner in the top of the sixth with a leadoff single, PCHS tacked on a final run in the bottom of the inning.

Green received a leadoff walk with Skipper hitting into a fielder’s choice. Skipper’s courtesy runner Mason Woodcock stole second and moved to third on a groundout. He scored two batters later on a wild pitch.

Skipper retired the side in order in the top of the seventh to finish off the complete game.

A two-out, run-scoring single by Starling in the top of the sixth inning capped a four-run rally lifting Pierce County from a 3-0 deficit to finish off the series sweep.

Jarrell (1-for-4) opened the sixth with a single and was lifted for courtesy runner Caden Williams. Tuten (1-for-4) ripped a double three pitches later ahead of Brandon Pittman’s (2-for-2) sacrifice fly plating Williams cutting the deficit to 3-1 with Tuten tagging and moving to third.

After Tuten was gunned down at the plate on Green’s grounder to third, a balk moved Green into scoring position. Following Skipper’s four-pitch walk, Green stole third and scored on a passed ball bringing the Bears to within 3-2.

Skipper who advanced to second on the passed ball, scored the game-tying run on Bennett’s (4-for-4) single to center. Bennett, who took second on the throw to the plate, raced home with the eventual game-winning run on Starling’s (2-for-3) single to left two pitches later.

Bennett, the third pitcher used by Pierce County, struck out the Knights in the bottom of the sixth in his first inning of relief. After surrendering a leadoff single in the seventh, Bennett retired the next three batters on a liner to short and back-to-back flyouts to left with the tying run stranded at second.

After PCHS failed to capitalize on a pair of two-out singles in top of the first by Bennett and Starling, the first of 10 base runners stranded, the Knights plated two runs in the bottom of the inning against Crews (3 IP, 4 H, 2 R, 1 ER, 5 K, 4 BB, 1 WP).

Consecutive one-out singles and an intentional walk loaded the bases. A run-scoring single followed with an error on the play allowing the second run to trot home for the 2-0 advantage.

Phillips (1-for-4) opened the frame with a single. Tuten reached on a one-out error with Pittman beating out his sacrifice bunt to load the bases. Consecutive strikeouts ended the threat.

Upson-Lee left the bases loaded in the bottom of the inning with a pair of one-out walks sandwiched around a single. Crews recorded a strikeout and a first-pitch line out to escape.

A runner caught stealing at home plate for the second out spoiled the PCHS third inning. The Bears had a second runner cut down at the plate in the fourth on a throw from right field.

Pittman kept the fourth inning alive with a two-out single with Green getting hit by a 0-2 pitch. Skipper pulled a 0-2 pitch to right with the throw home nailing Pittman, who was trying to score from second.

A leadoff single was followed by a caught stealing. Two one-out singles and an eight-pitch walk loaded the bases. A six-pitch swinging strikeout (five fouls) and a 3-2 pitch strikeout ended the threat.

After Pierce County was unable to cash in on Bennett’s leadoff single in the fifth, the Knights scored in the bottom of the inning for a 3-0 advantage. A two-out double was followed by a run-scoring single.