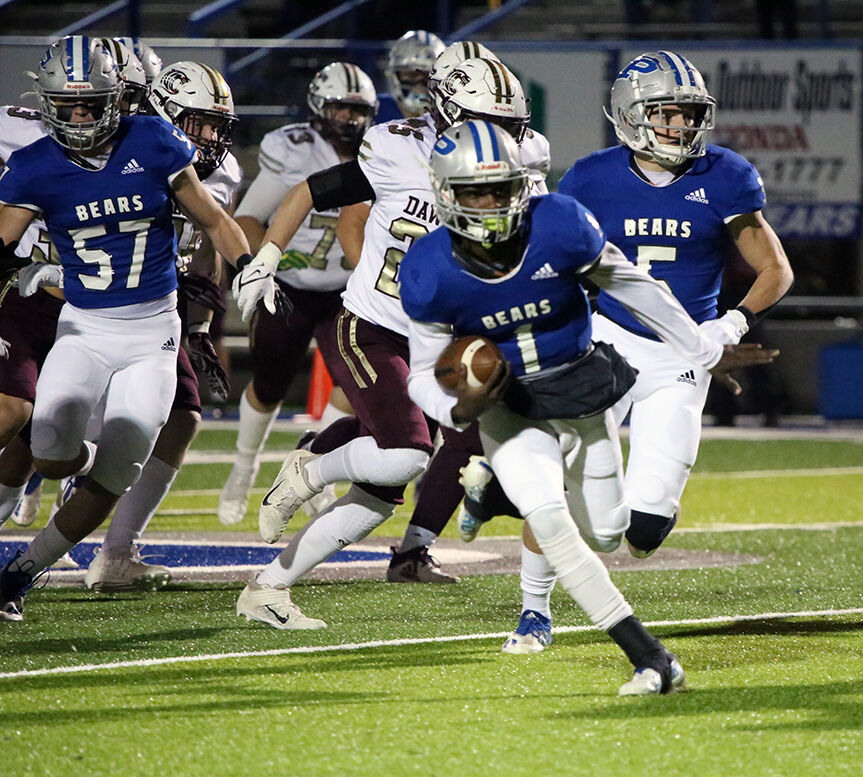 Bear runningback DJ Bell (1) runs the opening offensive play for the Bears for a touchdown after receiving blocks from Hugh Saussy (57) and Carson Sloan (5).

Bear wide receiver Daytin Baker (9) celebrates with center Henry Peagler (52) after scoring on the second offensive play by the Bears.

Bear runningback DJ Bell (1) runs the opening offensive play for the Bears for a touchdown after receiving blocks from Hugh Saussy (57) and Carson Sloan (5).

Bear wide receiver Daytin Baker (9) celebrates with center Henry Peagler (52) after scoring on the second offensive play by the Bears.

Third-ranked Pierce County rode the athletic skills of D.J. Bell and a dominating defense to shellack Dawson County 49-0 here in the second round of the Class AAA state playoffs.

PCHS (10-2), winners of six straight, scored on its first seven possessions bolting out to leads of 21-0 after one quarter, 35-0 at the half, and 49-0 through three quarters.

The win sets up a quarterfinal pairing at home with Region 2 runner-up Peach County (8-3). The Trojans, winners of five straight, upset top-ranked and previously unbeaten Monroe Area (11-1) 24-21 on the road.

“Being able to practice during Thanksgiving is always special,” said head coach Ryan Herring. “We (team) have a lot to be thankful for right now. All the credit goes to the players and all the glory to God.”

Bell’s recent shredding of enemy defenses continued with the first-ever 300-yard rushing night in PCHS history. He reached the mark on the last of his 33 carries, a five-yard scoring effort on the last play of the third quarter.

Bell threw for two scores to Daytin Baker covering 39 yards and four yards finishing the night 5-for-5 for 108 yards accounting for 408 of Pierce County’s 429 yards of total offense. He also tossed for a two-point conversion.

Defensively, the Bears forced the Dawson County offense to commit four turnovers (three fumbles, interception) resulting in 21 points. The Tigers were held to 150 yards of total offense with minus-2 in the rushing department. It was the second straight game the PCHS defense recorded negative rushing yards.

The shutout was the fourth straight for the Bears and the first post-season back-to-back blankings in school history. Pierce County now has six shutouts heading into the “Elite 8” showdown.

“It’s hard to shutout teams in this era of football,” stated Herring. “To get two in a row in the playoffs should let people know this is a special group. This is a golden era of Pierce County football.”

Friday’s game was over in the first 3:35 of the opening stanza. The Bears jumped out 14-0 running just two offensive plays.

“The first play for a touchdown set the tone,” Herring said. “We grabbed the momentum immediately. It was just a great job by our players.”

Pierce County’s T-Votny Brewton recovered a fumble at the Dawson County 44 on the Tigers’ third play from scrimmage.

Bell sped 44 yards off right tackle on Pierce County’s first snap to kick start the rout. Jonah Allen’s PAT ricocheted off the left upright leaving the score at 6-0 with 10:26 on the clock.

A bad snap on Dawson County’s ensuing possession was recovered by quarterback Zach Holtzclaw at the Tigers’ three. The visitors utilized a quick kick on third down with PCHS starting just 39 yards away from the end zone.

Bell hit a wide open Baker in stride on the next snap for the touchdown. Knox Bennett, also running free, pulled in the two-point conversion pass for a 14-0 lead with 8:25 remaining in the opening stanza.

Following a conventional three-and-out by the Tigers, Pierce County started pounding the ball. Each of the next five possessions ate up 3:51 or more off the clock averaging eight plays and 65 yards.

The Bears needed 4:16 and seven plays to cover 58 yards for their third touchdown of the night. Bell carried on every play capping the possession with a 16-yard run with 3:02 left in the first period. It was Bell’s third carry of 10-plus yards in the drive. Allen followed with the first of five consecutive PATs as the lead grew to 21-0.

Bennett’s fumble recovery at the Bears’ 22 three plays after the kickoff followed a 35-yard pass from Holtzclaw (12-of-25,  152) to Dominic Leblanc (three catches, 40 yards) moving the ball to the PCHS 20.

Dawson County came right back down the field using its RPO (run/pass option) game to move the ball to the Bears’ 19. Another fumble recovery by PCHS’s Wade DiBiase thwarted the Tigers’ deepest penetration of the night at the Bears’ 16.

Pierce County followed with one final touchdown before intermission with a nine-play, 84-yard possession eating up all but the final :09.6 of the second quarter for a comfortable 35-0 lead.

After Dawson County recovered a squib kick at the Bears’ 35 to start the second half, the Tigers quickly turned the ball over following four consecutive incompletions.

PCHS moved 65 yards in seven plays over 3:51 for a 42-0 working margin. A 30-yard completion from Bell to Luke Bennett (two catches, 46 yards) got the drive started. A 19-yard completion to Carson Sloan on a third-and-six set up Bell’s two-yard run one play later with 7:22 left in the third quarter.

Another defensive stop followed with a failed fourth down attempt by the Tigers at the Pierce County 49.

The Bears put the icing on the cake going 51 yards in eight plays with Bell capping his record-setting night with a five-yard run on the final play of the quarter.

Each team had one possession during the “mercy rule” fourth quarter. Baker’s interception, a third straight game with a theft, ended Dawson County’s final possession.

The Ho-Ho History of the Christmas Card