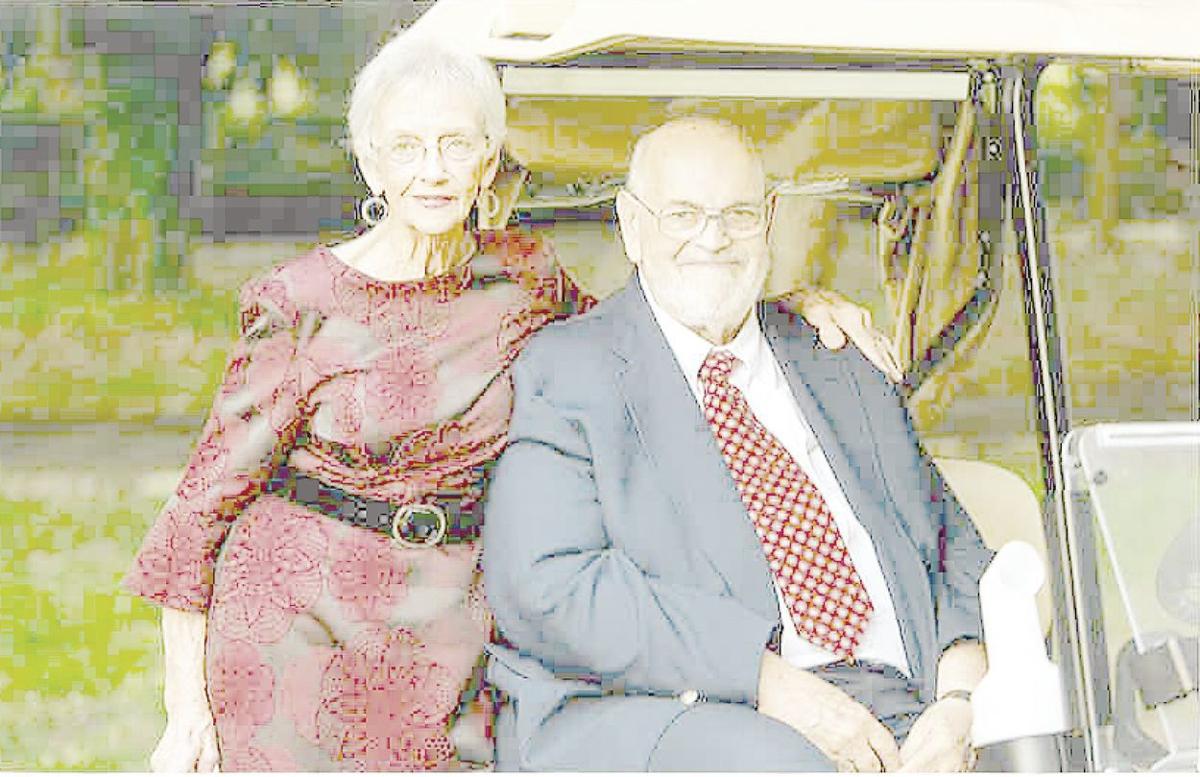 Linda and Gordon Nessmith knew each other a lifetime before discovering love. 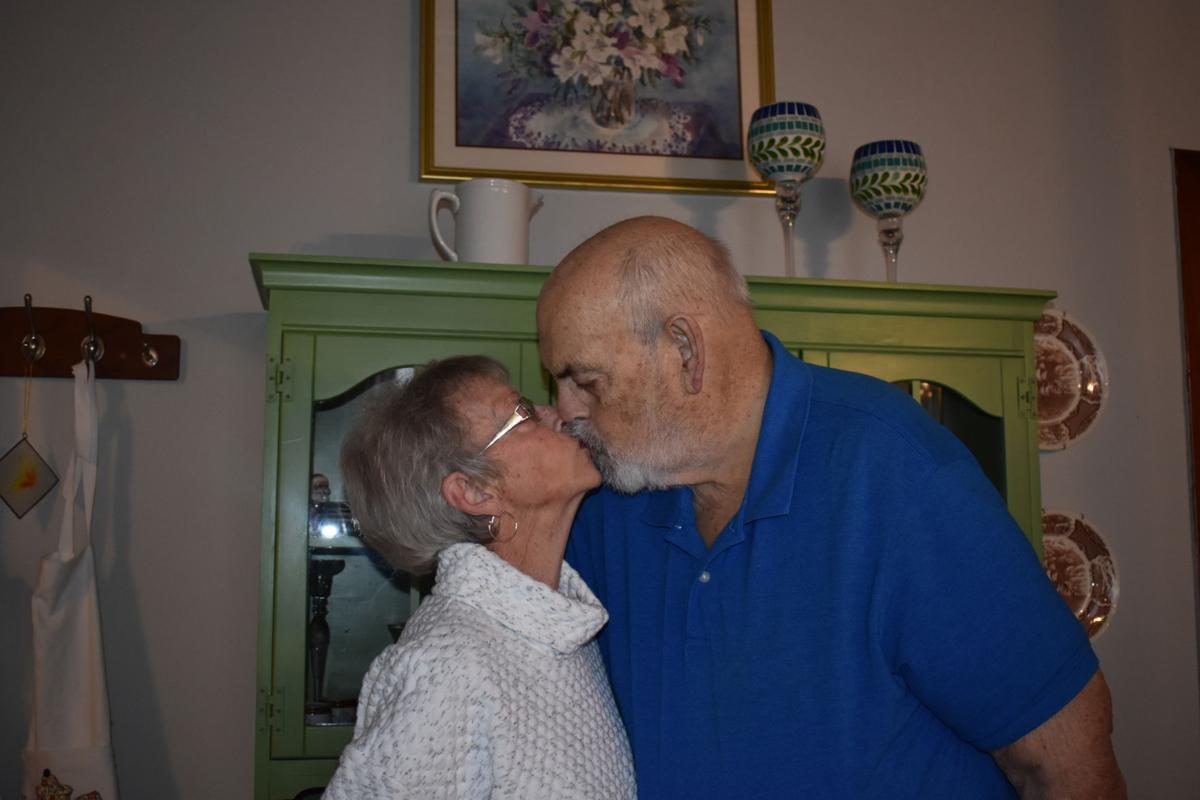 Linda and Gordon Nessmith share a kiss in their Park Street home in Blackshear. The couple will celebrate Valentine’s Day shortly after their 30th wedding anniversary.

Linda and Gordon Nessmith knew each other a lifetime before discovering love.

Linda and Gordon Nessmith share a kiss in their Park Street home in Blackshear. The couple will celebrate Valentine’s Day shortly after their 30th wedding anniversary.

Sometimes true love stares folks in the face for years and they never recognize it. But, what a beautiful thing when it’s discovered. Perhaps the years that passed made it a stronger, more lasting love.

That’s how Gordon and Linda Nessmith feel about their love story.

The couple celebrated their 30th anniversary last week, but they’ve known each other for 77 years. They were ‘cradle mates’ at First Baptist Church in Waycross and graduated from Waycross High School together in 1960. For the last 20 years they’ve lived their love story in one of Blackshear’s historic homes on Park Street.

During high school they ran in the same circles, mostly getting into trouble they recall with a laugh. Linda recruited Gordon’s help to make another fella jealous once, and it worked because she had a date the next day.

Linda married shortly after high school and raised four children. Gordon played the organ at her wedding. The classmates kept in touch through the years, and he would drop by for dinner occasionally.

“He and my husband got along fine  — just an old high school friend,” she recalls.

Their love story began years later after Linda divorced and moved back to Waycross with two of her children. She worked as a travel agent and helped Gordon book a trip for his mother and aunt. Not long after, she was visiting with them and Gordon took her to dinner.

“We had a wonderful time,” Gordon agrees.

A few weeks later the longtime friends were sharing a cup of coffee when Gordon made a revelation that left Linda speechless.

“He said, ‘You know, we should have gotten married’,” Linda says. “I got up and left and came back to Waycross!”

“She flew out of that house so fast!” Gordon recalls, shaking his head.

Two weeks later he knocked on Linda’s door holding a vase of roses, a box of chocolate and two jewelry boxes.

“He said, ‘you need to sit down old girl’,” Linda remembers. “All of a sudden he and all his paraphernalia gets down on one knee, and he says, ‘I have loved you all my life’.”

She was stunned, but Gordon urged her to answer his marriage proposal quickly.

“Answer quickly because my leg is going to sleep,” Gordon said.

The couple talked all night about their future together, making plans. Soon they told their families, and everyone was excited  — almost too excited.

“His mother wanted the wedding done one way, and my mother wanted it done another way,” Linda says. “Lord have mercy, it was just too much.”

“It got out of hand real quick,” Gordon agrees.

So Linda and Gordon, in their mid-forties, did what lovesick youngsters often do. They eloped to the nearest Courthouse one afternoon. Linda’s son stood as their best man.

The Nessmiths hadn’t planned to elope so Gordon didn’t have a wedding band for Linda. He wound one together out of bread wires the morning they ran off together. Through the years the couple has pawned several wedding bands when times were tough but they keep that bread wire ring stowed away in a small jewelry box.

Linda and Gordon did get their wedding ceremony, although it was planned without their knowledge.

Not long after they were married they attended their 30th high school reunion where classmates surprised them with a wedding ceremony. One classmate, now a licensed minister, married them. Friends brought Linda a veil and bouquet, and a boutonnière for Gordon.

The Nessmiths' love story carries the aura of a fairy tale, but it took courage to start their life together. And, they took that leap of faith with their eyes wide open.

“Go with your gut, but it has to do with respect first,” Linda advises young couples today.

Starting their life together as middle-aged adults meant the challenges of growing old together came to the Nessmiths sooner rather than later. Gordon has had two strokes in their years together. Those days were the most challenging of their marriage, Linda says.

“The challenging part was the strokes for me, and not knowing if he was going to make it, and what was going to happen,” Linda says. “I’m thinking, this is Willie, a slice of my heart is gone.”

Gordon was in rehab for several weeks following each stroke. Linda didn’t know at times if he’d ever be able to return home.

The Nessmiths were slow to discover their love for each other, but 30 years later they’re more in love than ever before. The day of their interview with The Times Linda beamed at the thought of their pending lunch date to Wendy’s that afternoon. Even the simple things in life are exciting when shared with a soul mate, even if it did take years for the Nessmiths to find each other.

Editor’s Note: This story of a local couple who were steadfast friends who later became lovers is published in celebration of Valentine’s Day, February 14.

Protecting Your Financial Health in These Uncertain Times

Fact vs. fiction: Drugs and alcohol in TV, movies and social media