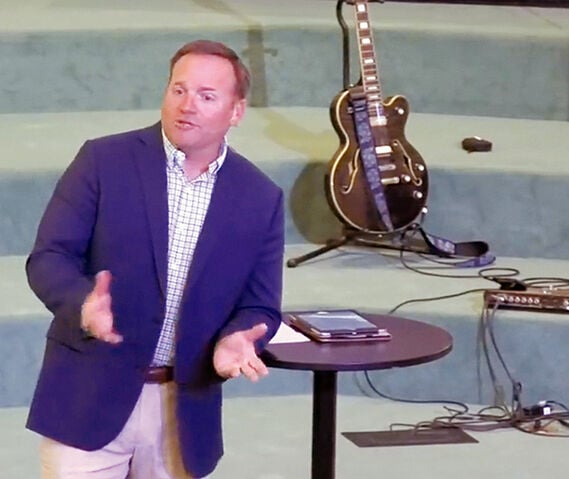 The Rev. Eric Rentz preaches during his first year as pastor of First Baptist Church in Blackshear. 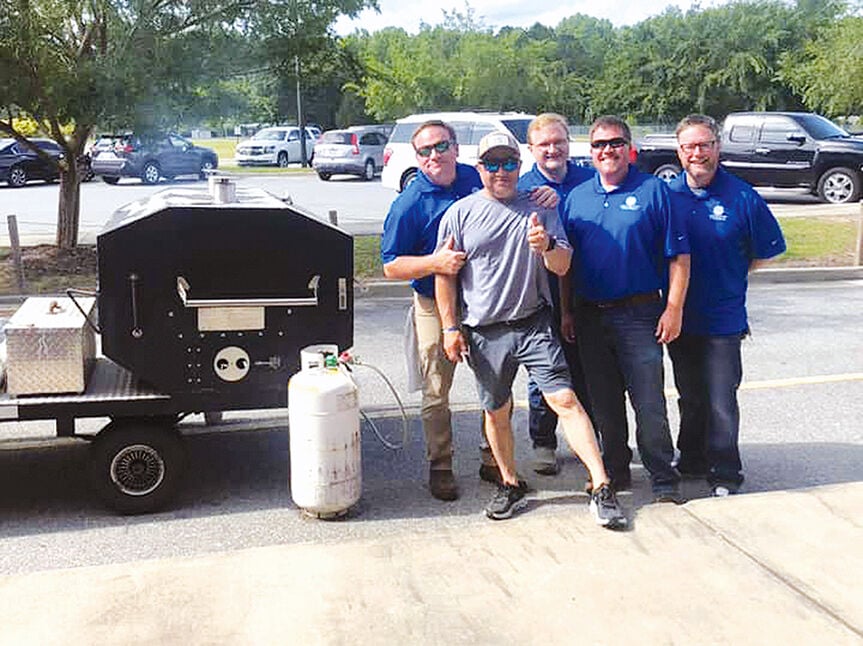 The Rev. Eric Rentz is shown along with Jimmy Lydon and First Baptist staff Will Emery, Matt Peters and Bear Grant as they prepare a meal for Midway Elementary teachers. 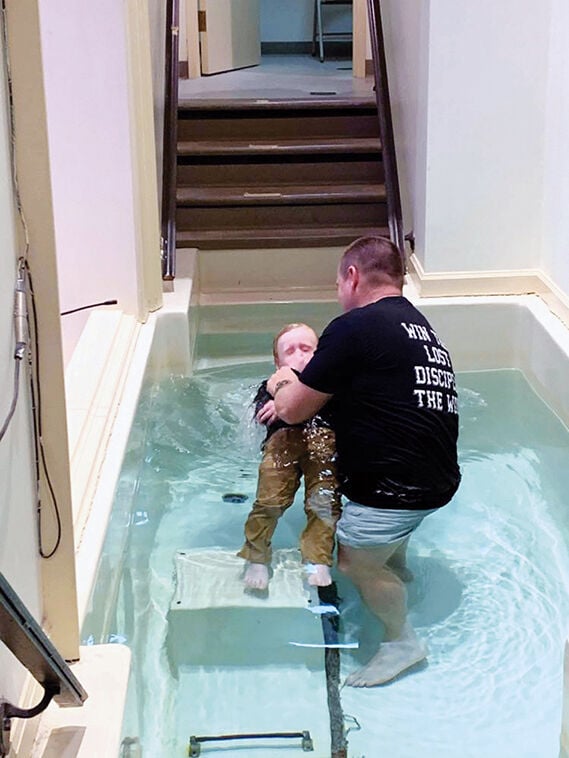 The Rev. Eric Rentz preaches during his first year as pastor of First Baptist Church in Blackshear.

The Rev. Eric Rentz is shown along with Jimmy Lydon and First Baptist staff Will Emery, Matt Peters and Bear Grant as they prepare a meal for Midway Elementary teachers.

When the Rev. Eric Rentz came to Blackshear last year as the new pastor of First Baptist Church, he admits he only knew people from the bridges of their noses and up.

“The circumstances were just so unreal and unusual,” the pastor says, chuckling at the memory.

Mask wearing required as a defense against the COVID-19 pandemic concealed many of the faces of the congregation he was now called to shepherd.

“I was so new that many people didn’t recognize my cell number and for that reason didn’t answer the phone. I remember one day going through the directory and making 45 phone calls and only three people answered.”

When Rentz arrived at First Baptist Church Blackshear, he came into a pastor’s perfect storm. The church had just reopened in the midst of the pandemic, the majority of senior adults were quarantined and he was following the pastorate of a beloved, long-tenured pastor, the Rev. Dr. Bill Young.

Those might seem like daunting challenges, but Rentz felt that God had clearly led him from serving as the Southeast’s Mission Consultant for the Georgia Baptist Mission Board, back into pastoring.

Upon the affirmation of the church, and Rentz’s acceptance, his ministry at First Baptist began to not only maintain a congregation, but satisfy a vision for growth and revitalization.

Rentz notes there was nothing traditional about anything that would happen in this major transition.

Even the vote to call Rentz as the church’s new leader happened by way of a partial assembly and a drive-in vote.

When Rentz began his ministry here there was no reception to welcome the new pastor, there were no complete faces to be seen and most listeners were online. Because of assembly restrictions and social distancing it would be weeks and months before the new pastor could so much as exchange a handshake or a hug. As for those in need, hospitals, nursing homes and the private homes of the medically vulnerable were strictly off limits.

With so many challenges and limitations, Rentz did the only thing he knew to do, “rely upon God and the people He has given you.”

“I was blessed with a staff that had been navigating the pandemic for months. They were well versed in technology and they quickly brought me up to speed. I had never wanted to be a television or radio preacher and the thought of my every word going out to thousands every week was quite intimidating.”

“We couldn’t have business meetings and the majority of our leadership committees could not function due to many of our members being quarantined. For the most part, our deacon board had to navigate as the sole governing body within the church.”

“Every decision had to be scrutinized in view of an ongoing pandemic and what made some folks happy brought others increased stress and worry.”

With a very active deacon board, a well equipped staff, and a determined shepherd, First Baptist found a way to thrive.

“Our greatest failure came in communicating to everyone. We obviously couldn’t broadcast via radio all of the decisions we were making but our tech savvy seniors seemed to keep up pretty well.”

“Our weekly worship service caught great attention from our extended online community and at one point we were averaging reaching as many as 3,000 people.”

Throughout Rentz’s ministry, he has always had a deep desire to be involved in the community, but COVID-19 presented a challenge for engagements. With so many regular events canceled and tough restrictions in place, learning a new community would seem almost impossible.

“Then it happened, the Georgia High School Association decided that while we could keep people from concerts, movie theaters, and even church, you just can’t cancel football,” Rentz said.

“ I truly believe that going to the stadium on Friday nights saved me from complete failure in engaging our community. It became my habit to meet as many people as I possibly could so that we could get to know each other.”

Rentz and football have a long history with each other. The pastor has sought out athletic programs in every community he has served.

“Coaching our boys growing up and connecting with families was just an organic way to engage people and having that back in the midst of a pandemic was a huge advantage.”

Rentz eventually began to be acknowledged by players and coaches as an unofficial team pastor and had the privilege of being in the locker room following a state championship win.

As the year dragged on, the church slowly began to open. People were getting more and more comfortable with returning to in-person small group and worship attendance.

“Our crowds began to increase and people we had never seen before started showing up. I couldn’t distinguish a member from a guest.”

Deacons, ushers and staff members worked hard to make sure Rentz could meet those who were visiting and also introduce members to him weekly. With great patience, and creative practices, First Baptist learned how to navigate the challenges of the pandemic era.

“We knew God had blessed us as we saw new faces (with masks on) every week. The Lord allowed us to meet all of our financial obligations and even gave us a surplus of resources so we could do some needed renovations.”

Perhaps the most difficult storm Rentz faced was personal in nature. Rentz is the father of three children and his wife, Sandi, is an educator. In August of 2020 their oldest son, Seth, enlisted in the United States Coast Guard. His siblings, Caroline (junior) and Garrison (sophomore) would begin attending Pierce County High, and their mother would continue fulfilling a contract with the Long County Board of Education as a sixth grade teacher.

“It was really hard to stay focused some weeks as I had a family navigating the emotions of transition. We had so many friends who reached out to us with prayers and encouragement and God was faithful.”

So what does life look like  one year later for Rentz, his family, and First Baptist Blackshear?

“To quote our local head coach, Ryan Herring, G3! We ‘Give God Glory!’ He has sustained our church, He has sustained our children and He has sustained me. This year we have had over 50 additions to our church, many through baptism, and we are on track to do very well despite the many challenges. I’m seeing most of our congregation getting back to regular in-person attendance and we hope to have some signs of normalcy return to our lives. It’s gonna take some continued patience on the part of our parishioners to allow me time to get to know everyone. My family is good, the kids have made great friends, Seth is doing well as a Boatswain’s Mate in the Coast Guard and Mama (Sandi) just got a job at Pierce County High. I truly believe the best days are ahead and I’m looking forward to what the future holds.”

Tesla Supercharger Network Will Soon Be Available to All EVs