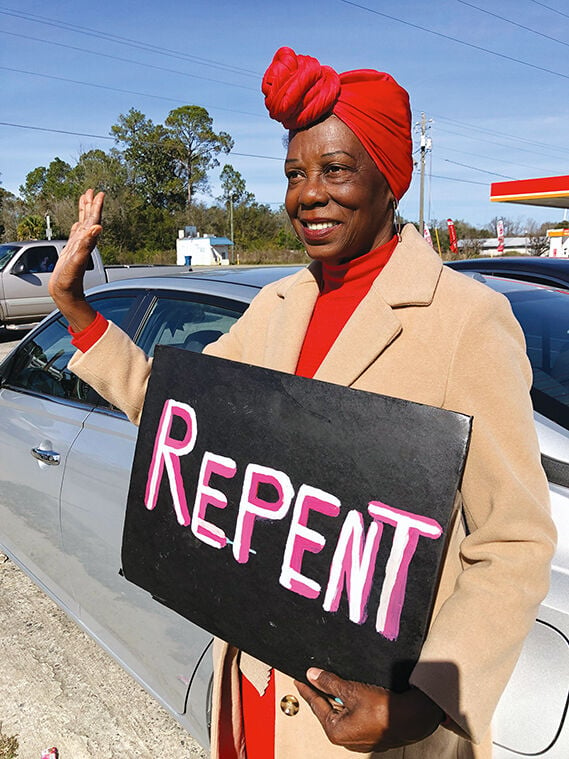 Earlene Sharp, right, with her favorite sign. She feels it’s important everyone asks for forgiveness of their sins and accepts Jesus in order to secure their place in Heaven. 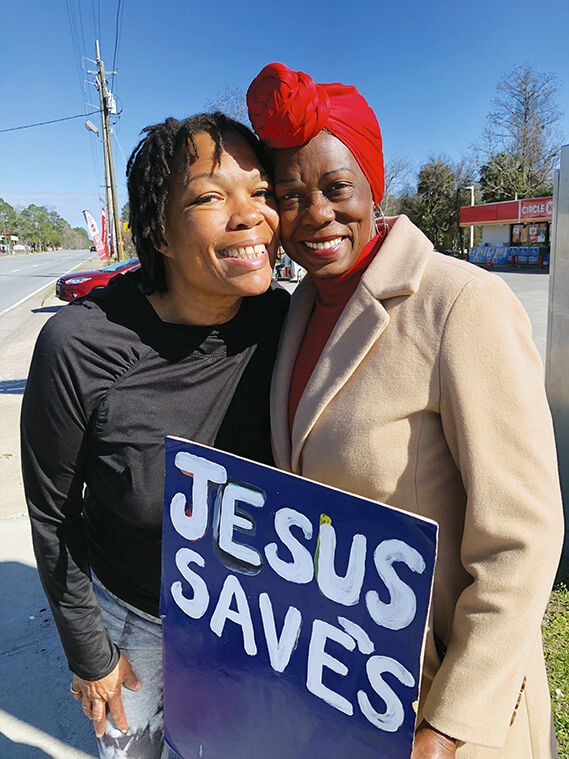 Earlene Sharp with her sister Pamela Foster, left, after Foster stopped by briefly at the Patterson Circle K while Sharp was doing her daily sign waving between noon and 1 p.m. Tuesday, Jan. 4.

Earlene Sharp, right, with her favorite sign. She feels it’s important everyone asks for forgiveness of their sins and accepts Jesus in order to secure their place in Heaven.

Earlene Sharp with her sister Pamela Foster, left, after Foster stopped by briefly at the Patterson Circle K while Sharp was doing her daily sign waving between noon and 1 p.m. Tuesday, Jan. 4.

She’s standing on the corner  waving — not for money or for recognition — but to praise God.

Earlene Sharp loves the Lord so much for saving her life — twice — that she devotes at least one hour every day to sharing that love with others on the southeast corner of Main Street and U.S Highway 84 in Patterson.

“I wouldn’t be here at all if it weren’t for God,” Sharp, 63, said last week as she held up her blue and white “Jesus Saves” sign and waved at passing motorists in front of the Circle K gas station.

She said she decided last August to first join another corner fixture known to her only as Brian at Main Street and Highway 84 in Blackshear after seeing him and hearing him on his megaphone for the first time while pulled in at McDonald’s.

“I used to stand on corners in Miami with the Church of God down there when I was younger, but Brian was the first person I’d seen in Georgia doing it,” the Evergreen Church member said.

It didn’t take her long, however, to realize she’d rather be on a corner closer to her Patterson home so she could more easily ride her bicycle when the weather was nice.

Dressed neatly with a bright red head scarf and matching red sweater dress under a fashionable beige wool coat, no one would ever guess this longtime Patterson resident drove 18-wheelers all over Georgia and Florida for about 25 years until she was forced to retire in 2014

Her life came to a screeching halt one day when she was stepping out of a milk tanker truck in a hurry as it started to rain and she lost her grip.

“I just fell all the way down and onto my back in the road and it just crushed me,” she said. “I held my head up, though. I think if I hadn’t held up my head I would have been dead. I messed up my spinal cord and was paralyzed for awhile. But I’m alive and walking now! Thank you, Jesus.”

She said being in the right place at the right time in Daytona Beach to get immediate medical attention and the surgery she needed probably contributed to her ability to recover as well as she did.

“Thank God I was down there, because that back surgery guy did a real good job,” she said. “I had to learn to walk again and I still have to grip my toess to hold my balance sometimes. You see me wobbling around. I fall easily and that’s why I stay away from the edge of the road now.”

If that wasn’t enough, Sharp was diagnosed with Stage 3 breast cancer in 2019 and had to undergo surgery, 36 rounds of radiation and a harsh IV chemotherapy known as “the red devil” that nearly took her down.

She said she thought she was a pretty tough woman until she came face to face with the clear, bright red chemo Adriamycin.

“Oh, Lord, that stuff made me sick,” the Miami native said. “I hated to even go to chemo. I had to get blood transfusions and all of that. It kind of did me a job. I thought I had a strong body. I’d seen everybody else with breast cancer get treatment and go back to work and stuff, but it did me different. It knocked me down!”

Still, Sharp feels blessed now because she’s cancer free and able to live her life with joy and praise.

“I prayed to God every day for my healing and He heard me. I’m here and walking and smiling and loving all the people who pass by this corner and honk and wave,” she said. “I love them and I think most of them love me and appreciate me and what I’m doing.”

Just then her sister, Pamela Foster, honked several times as she pulled into the Circle lot to share some news with her.

Foster, who serves as president of the NAACP in Pierce County, said she’s in awe of her sister.

Sharp said some people think she’s out there at noontime begging for money. They don’t seem to realize she’s actually begging God for their souls.

This is why her red, black and white “REPENT” sign is her favorite.

“People need it,” she explained. “They really need it. The only thing I can take to Heaven with me is other people.”

So she continues to wave her signs and give a thumbs up to all the fellow truckers and others — many of whom honk and wave back.

She said the only thing that keeps her home is rainy weather.

4 Ways to Feel Your Best While Watching the Big Game