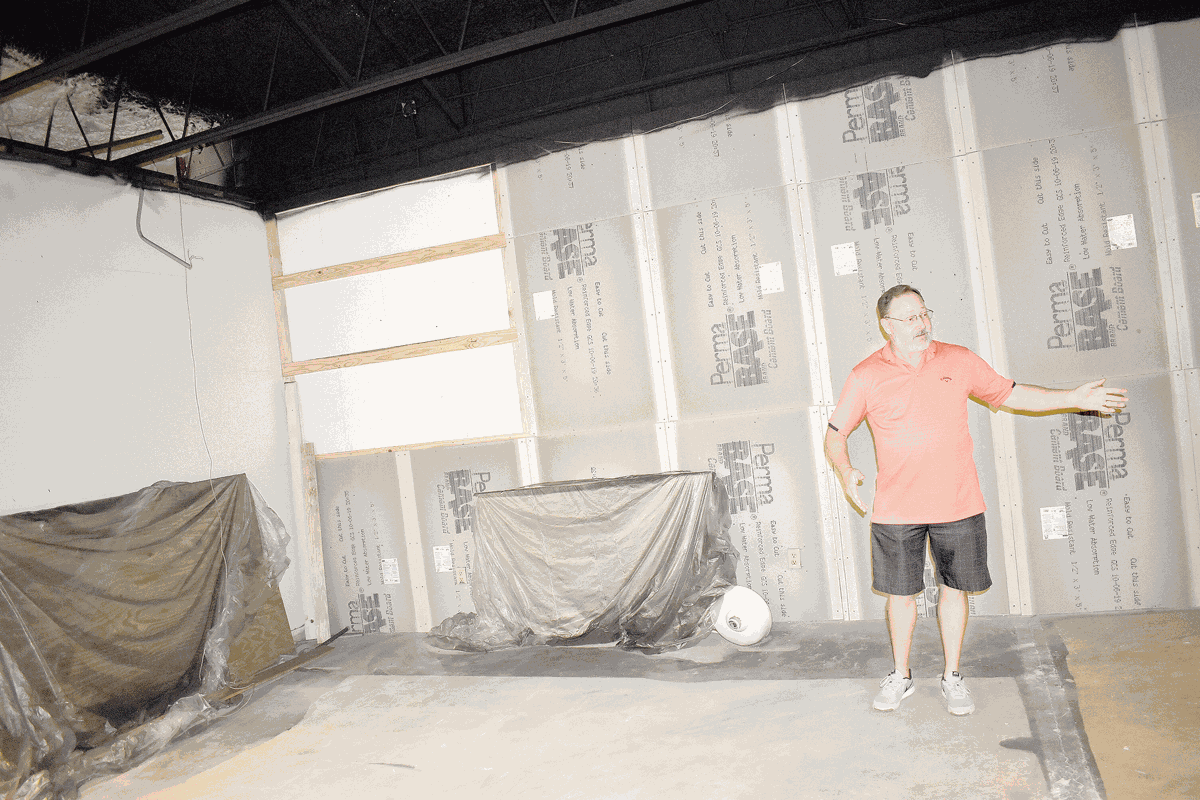 Can you see it? John Edge describes what the flooring, seating area and decor for his new coffee shop ‘Roasted’ will look like later this year. Edge and his son, Joshua, have gutted out the former Georgia Power office for their new business venture. 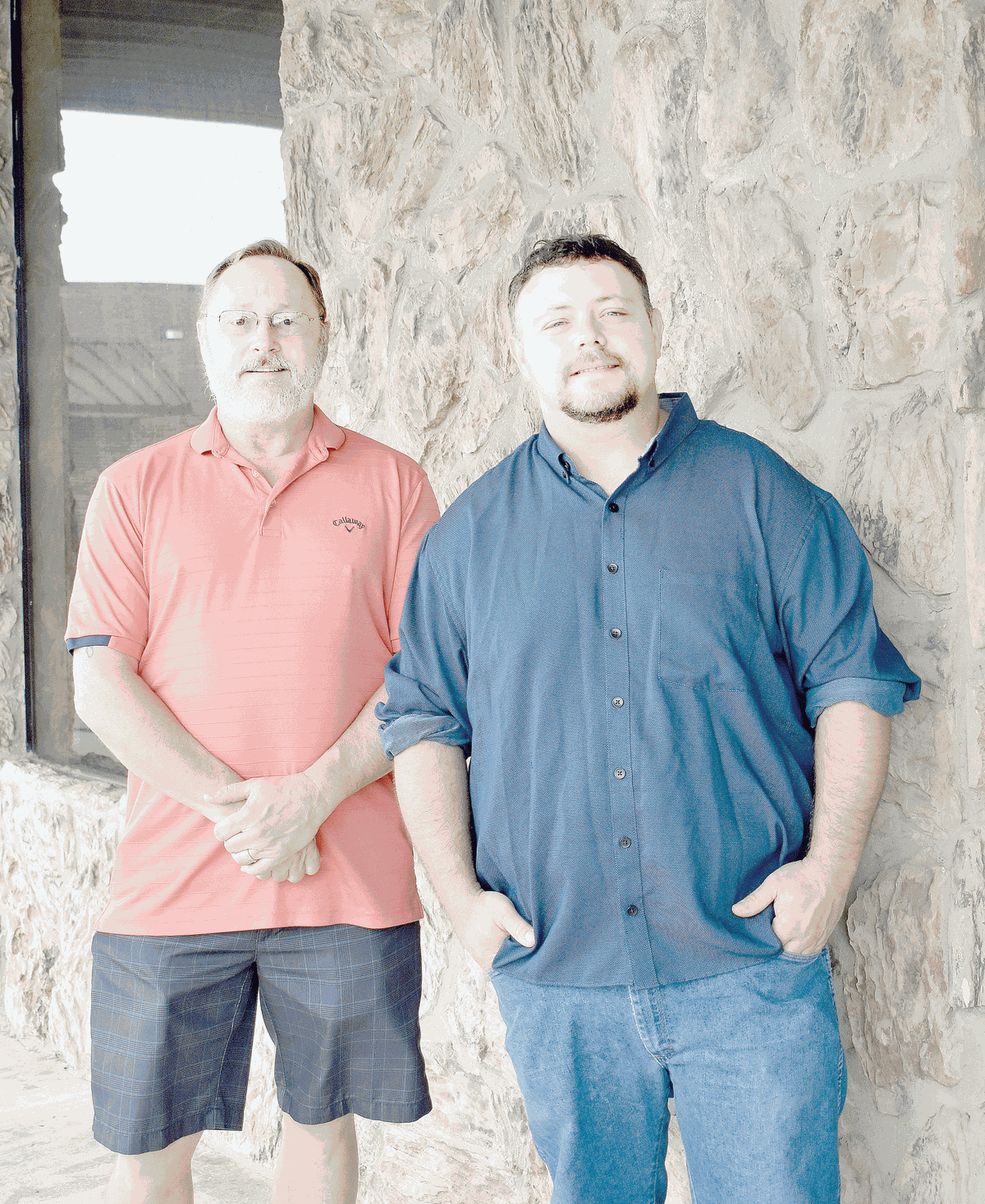 John and Joshua Edge stand in front of their newest father-son venture – a coffee shop they plan to open in Wall’s Plaza.

Can you see it? John Edge describes what the flooring, seating area and decor for his new coffee shop ‘Roasted’ will look like later this year. Edge and his son, Joshua, have gutted out the former Georgia Power office for their new business venture.

John and Joshua Edge stand in front of their newest father-son venture – a coffee shop they plan to open in Wall’s Plaza.

Calling all coffee lovers  — A new spot for your morning java is slated to open in Blackshear by early summer.

Father and son duo, John and

Joshua Edge, are remodeling the former Georgia Power building in Wall’s Plaza with plans to unveil “Roasted,” a coffee shop and bistro, by May.

“Before school lets out this place will be open,” John Edge told The Times last week.

Edge, who’s been semi-retired for a while, says he needed something else to do. So, he and Joshua hatched their plan to open a coffee shop here  — a void he says needs to be filled.

“Every single day folks drive from Blackshear to Waycross and go to Dunkin’ (Donuts) or Ellianos and get their coffee and then they go to work. I’m convinced they want to drink that coffee on the way,” Edge says. “I feel like we’re going to fill a void in this community. Culturally, this community is ready for it.”

Kristy King Foreman, owner and founder of Ellianos Coffee Co. in Waycross, announced plans to open a Blackshear location in 2018, but Foreman had to forego those plans last year due to complications with Ellianos corporate requirements.

“Due to an agreement we made with our corporate office, we had to make the decision to not come to Blackshear,” Foreman said last week.

In an attempt to broaden Roasted’s appeal to non-coffee drinkers too, the Edges decided to also offer a lunch menu featuring pitas and salads.

“We had to create a situation that would get people to come in and buy that coffee in the morning and other people in the afternoon,” Edge says.

The Edges rented the former Georgia Power office and started gutting it out shortly before Christmas. They’re close to beginning the remodel work now. Roasted will feature drive-thru access, 40 seats inside and another eight on the walkway out front. They’ll fence in one side of the walkway in front of the shop and hang lighting above the outdoor dining area.

Edge describes Roasted’s vibe as modern and industrial with exposed ductwork in the ceiling above, brick face and galvanized metal walls and diamond-plated counters. LED drop down lighting will hang over the seating areas. The floor will be sealed and polished concrete.

Roasted will offer free Wifi and USB ports for customers to charge their phones, tablets and laptops while they enjoy a cup of joe or a quick lunch.

Customers will order drinks at one counter and then proceed to the deli counter to order pitas and salads made fresh to order  — orders will be prepared similarly to the way Surchero’s and Subway prepare sandwiches and TexMex dinners.

Roasted’s menu of pitas and salads was created in an attempt to give customers something handheld they could walk out the door with if need be, Edge explains.

“That (pita) rolls, it wraps, it’s tight and handheld,” John says. “Anything we put in a pita we’ll be able to put in a bowl.”

Edge is no stranger to entrepreneurship. He previously owned half a dozen Pro Lubes across Southeast Georgia and dabbled in the restaurant business as a co-owner before, too. He’s since sold off those businesses. Edge’s wife, Tara, owns and operates My Nail Salon in Blackshear.

Edge’s son, Joshua, will manage the day to day operations of Roasted once the coffee shop and bistro is up and running this summer.