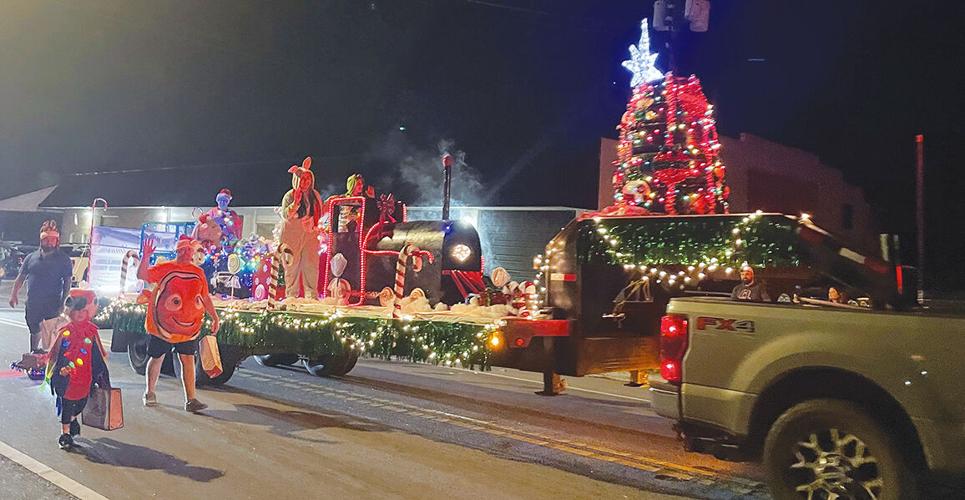 First Place float in the Dec. 6 Christmas Parade was this 20-foot toy train complete with “steam” from the engine pipe built by the owners of Addictive Aquatics and Rolling Bear Tires. Walking alonside the float is Addictive Aquatics co-owner Krystal Sikes as “Dory” and her son Austin. Pet store employee Libby Ruger, on top of the float on the left, dressed as a tree frog and another employee, Courtney Stewart, helped toss candy to the children lining the parade route. 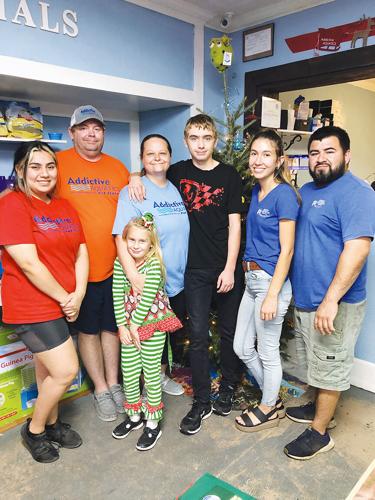 First Place float in the Dec. 6 Christmas Parade was this 20-foot toy train complete with “steam” from the engine pipe built by the owners of Addictive Aquatics and Rolling Bear Tires. Walking alonside the float is Addictive Aquatics co-owner Krystal Sikes as “Dory” and her son Austin. Pet store employee Libby Ruger, on top of the float on the left, dressed as a tree frog and another employee, Courtney Stewart, helped toss candy to the children lining the parade route.

When it came to entering a festive float in the annual Christmas Parade in Blackshear last week, Addictive Aquatics and Rolling Bear Tires were like fish out of water, hoping their crazy creation wouldn’t fall flat.

But after spending only about a month building the 20-foot “toy train” that included a realistic 6-foot-high tire Christmas tree, the local business owners walked away with a First Place prize of $300 and bragging rights that will carry them to next year’s parade.

“There were a lot of great floats, but we didn’t get to see them all because we were working on ours until it was time to pull onto Main Street,” Addictive Aquatics co-owner Krystal Sikes said with a laugh a couple of days after the parade. “We knew we had a decent float that we put our all into, though. We were pretty proud of it.”

Hospice Satilla won Second Place and $150 and Emmanuel Baptist Church won Third Place and $100 for their floats out of a total of six entries.

Better Hometown Blackshear Manager Bethany Strickland said the float judges were scattered along the parade route and looked for whether the float followed the parade theme of “Toy Trains & Candy Canes,” creativity and overall appearance.

“Sticking to the theme was major,” Strickland explained.

Sikes and her husband Matt and their friends from Rolling Bear Tires, Juan Jauregui and Cheyenne Harris, knew early on at the beginning of November they wanted to build a train and incorporate candy canes in the design.

They also wanted that wooden-framed train to pay hommage to both the pet store at 207 Main St. and the tire/automotive business at 3154 U.S. Highway 84.

“We wanted our personalities to come out,” Krystal said. “With animals it’s even harder because you can’t do a whole lot, so that’s the reason we all dressed up. I was Dory and Matt was Nemo and that was a big hit with the kids.”

Employees Diana Santana and Libby Ruger were a bunny and a tree frog, respectively, and 5-year-old Megan Sikes wore a parrot costume.

The train itself had a 6-foot engine that featured “steam” pouring out of its smoke stack from a fog machine. Behind it were three 4-foot-long train cars with a 3-foot-tall snowman fashioned from a stack of painted tires, piles of “presents” and a caboose with various sea creatures attached, resembling an aquarium.

The entire train rested on white, glitter-sprinkled sheets resembling snow atop a 30-foot trailer loaned by a friend.

The only member of this float team with float design experience was Harris.

“I used to manage Sonic in Waycross when I was 16 and they put me in charge of the parade float,” the mother of two said of that event six years ago. “I used my dad’s truck and won First Place. So now I’m two for two.”

Both sets of business owners said they had thought about entering a float in the Blackshear parade before, but they were both getting started with their shops and just couldn’t get it done at the time.

The Sikes opened Addictive Aquatics on the corner of Main and Highway Avenue in August of 2019. Jauregui and life partner Harris opened Rolling Bear Tires next to Dairy Queen in October of last year.

Krystal said her husband’s  addiction to all things fish began shortly after they’d married 21 years ago and she’d bought him his first gold fish.

“A few days after that, he got a tank and a week after that he got another tank and it just started,” she explained. “So our main thing was aquatics and we sold online for a long time and then decided to do retail because our customers around here said we needed a store. A lot of pet stores in the area had gone away.”

Matt said the 3300-square-foot shop began with only one shelving unit, but quickly expanded when they bought out a pet store in Tampa and brought all those supplies to Blackshear.

In addition to fresh and salt water fish and accessories, they carry small animals such as guinea pigs, hamsters and sometimes rabbits and chinchillas, as well as birds and reptiles.

They said it’s not unusual for customers to travel more than three hours on a Saturday to visit the store.

“We have a big Facebook and Instagram following,” Matt said. “We built a reputation of being a really good shop with great customer service.”

Their friends down the road said they, too, pride themselves in being a one-stop shop, but for automative needs.

“I’ve always worked on cars and dabbled here and there, pulling motors and stuff like that,” Jauregui said. “I’ve changed tires before, but never thought I’d be doing it for a living.”

“It’s a family business, really,” he said. “It’s not just mine. You’ll see my dad and and brothers there.”

Cheyenne said that now that the parade float bug has bitten, she’s ready to start on next year’s challenge.

“I’m like, ‘Go ahead and tell me the theme so I can get started,’” she said with a laugh, adding she’d like to encourage more local businesses to enter floats next time so there will be more competition for them.

“We’ll be fighting to keep our title,” Jauregui quipped with a grin.

Medicaid and CHIP Give Children Access to Behavioral Health Services

What Every Homeowner Should Know Before Making Renovations