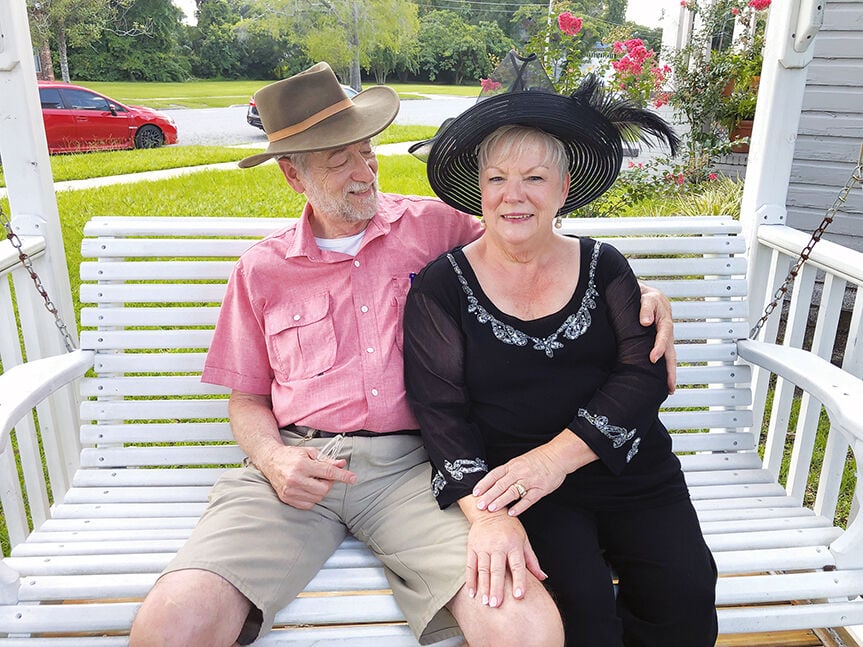 Dr. Earl T. Martin and Paula Preston Martin enjoy the swing Paula surprised him with for Father’s Day at their Waycross home last week. The two divorcees were married within seven weeks of meeting each other in November of 2019 and are proof true love can be found — even in your late 60s. 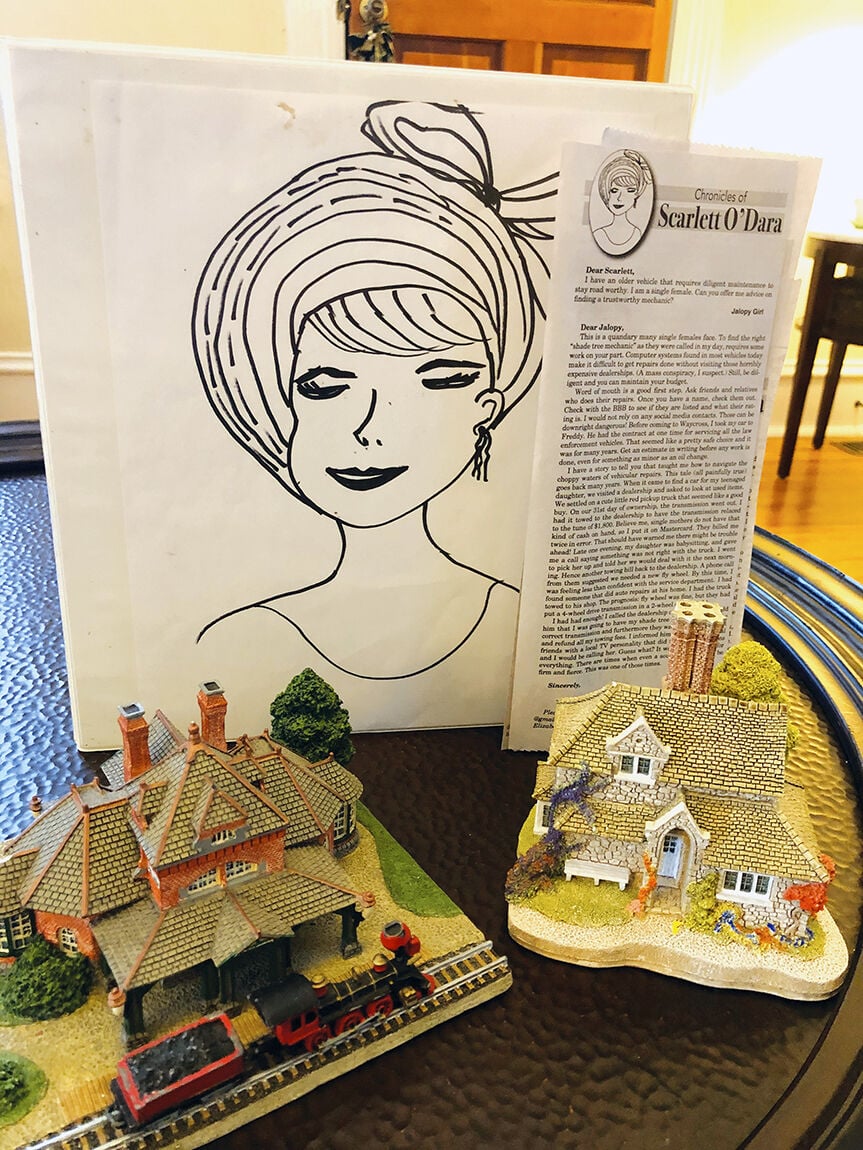 Paula Martin’s “Chronicles of Scarlett O’Dara” advice column folder and a published sample of her weekly work in The Blackshear Times serve as a backdrop for the cast iron train depot and house her husband, Dr. Earl Martin, gave her before they’d agreed to marry and buy a similar home near the Waycross depot.

Dr. Earl T. Martin and Paula Preston Martin enjoy the swing Paula surprised him with for Father’s Day at their Waycross home last week. The two divorcees were married within seven weeks of meeting each other in November of 2019 and are proof true love can be found — even in your late 60s.

Paula Martin’s “Chronicles of Scarlett O’Dara” advice column folder and a published sample of her weekly work in The Blackshear Times serve as a backdrop for the cast iron train depot and house her husband, Dr. Earl Martin, gave her before they’d agreed to marry and buy a similar home near the Waycross depot.

Like seemingly foolish, love-struck teens eloping behind their parents’ backs, many had their doubts about the whirlwind romance of Dr. Earl T. Martin and his blushing bride, Paula Preston.

“My pastor in Macon would not marry us,” Paula Martin said last week at their turn-of-the-century home in Waycross. “He said, ‘Miss Paula, you haven’t known this man long enough. I just can’t turn you over to him. You’re my responsibility. I just can’t do it.’”

When she asked him how long of a courtship would be enough, he told her at least six months.

“I told him that’s not gonna happen,” she said defiantly.

Little did they know at the time, six months later COVID-19 would have been raging across the country, making such a ceremony nearly impossible.

“Earl’s pastor did agree to marry us,” she said. “I had to come down and pass the exam, but he would marry us the first of January. It has been nothing but bliss ever since. We feel very blessed to have found one another.”

And just as they lovingly refer to one another as Boaz and Ruth of the Bible, they’ve had other terms of endearment for the past 17 months: “Scarlett” and “Rhett the Butler.”

The lymphoma survivor’s unique perspectives on relationships, gut-busting mechanical misadventures, sweet tales from childhood and passionate prose on patriotism are being shared in a weekly “advice” column in The Blackshear Times known as “Chronicles of Scarlett O’Dara” since March of 2020.

Although Paula had never written anything for publication before, she’d always loved the humor of Mark Twain and late columnist Erma Bombeck. So she approached a Times staff writer about submitting a weekly column.

Once the newspaper agreed to give her a shot, Scarlett O’Dara has taken on a life of her own.

“Most people have no idea I’m Scarlett,” she said with a laugh. “It warms my heart when they tell me they think I’m funny after I reveal my secret identity.”

It was the longtime Blackshear and Waycross general practitioner who came up with her unusual nom de plume.

“She needed something memorable with a twist,” he said.

Paula feels being named after the fictional Scarlett O’Hara from the southern classic “Gone with the Wind” couldn’t be more perfect.

“We both love Civil War history and have both visited Chickamauga Battlefield and other battlefields in Kentucky,” she said. “That’s our history. That’s what’s created the lives people live today.”

It was such common threads that brought the two together back in November of 2019 when the former 2014 Independent congressional candidate was giving a speech at the Constitution Party’s statewide convention at Paula’s church in Macon.

Paula had volunteered to set up the refreshments for the event.

While she had noticed Earl enter the building and felt he was attractive, it wasn’t until he started speaking that Paula really began to take notice of this tall stranger.

“The things he said just resonated with me,” the divorced mother of two said. “I thought he sounded like Thomas Jefferson or John Adams. I thought, ‘This man is an orator. He’s a statesman. I like this man.’”

After chatting with him briefly about how his nurse sister does medical coding at home, they exchanged phone numbers to discuss that further since she’d worked in medical offices for the past four decades.

It wasn’t long after that that the two became more “textually active.” That’s how they jokingly refer to their cell phone conversations.

It wasn’t until Paula confirmed there wasn’t a “Mrs. Martin” that they made plans for their first date. Earl treated her to her first performance of The Nutcracker Suite ballet in Macon.

Not long after that, things got serious. Following an elaborate Christmas Day dinner at Biltmore Estate in Asheville, N.C., the two simply agreed they should be married.

The University of South Florida graduate was then eager to show his new love a 2,900-square-foot home on the corner of Elizabeth and McDonald streets in Waycross he’d had his eye on for a while.

“We absolutely love it,” she said, adding the downstairs of the two-kitchen home is the perfect place to entertain now that Earl has decided to run for Waycross City Commission.

Paula, who once wanted to be a nurse, now handles insurance claim denials at her husband’s McKinney Medical Center practice in Waycross.

Earl said he felt called to be a doctor when he was still only a teenager in Daytona Beach, Fla.

“I think humans actually have six senses,” the MD with five siblings said. “There is a sense here — in your heart —that only you can hear. As a believer, I believe that’s how the Holy Spirit talks to you. In that still, small voice.”

It was that same voice that urged him to quit his practice at Blackshear Family Practice in August of 2001, he said. He wasn’t sure why until three weeks later when his parents were in a tragic motor vehicle accident that left his mother with a severe head injury.

“She eventually passed away three months after that,” he said. “But being off work at that time enabled me to go down to be with my father and help with my mother. I had a sense that the Lord was directing me to be able to do that.”

It wasn’t long before he began seeing patients again and said he will keep working until the Lord directs him otherwise.

“As I say regularly, I just keep practicing until I get it right,” he said with a laugh.

“The moral of this story is never give up on true love,” she said. “You can find true love —even at age 68. I’m so happy to have Earl in my life. He is truly a Godsend.”