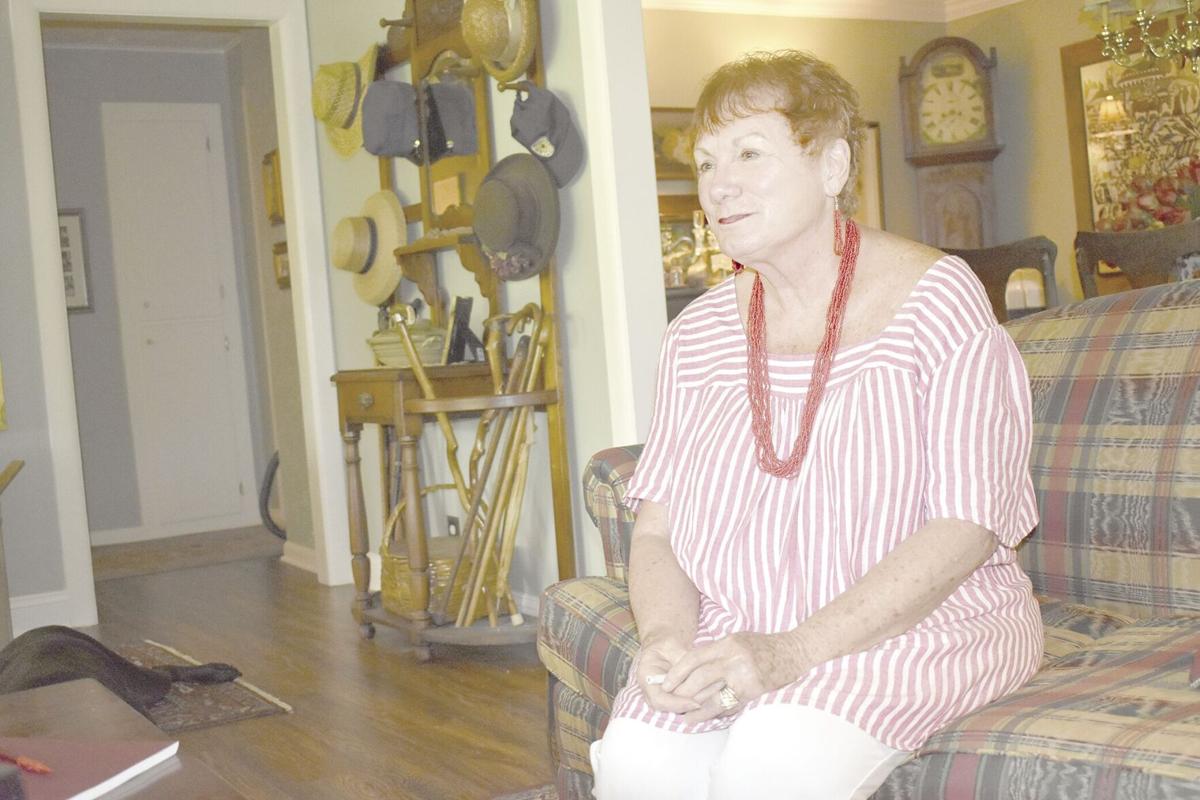 Marianne Graf-Thomas strokes her late husband, Al Graf’s, wedding ring fondly. Graf’s plane was shot down in the Vietnam jungle in 1969, but his ring made its way home to Marianne on Valentine’s Day this year. 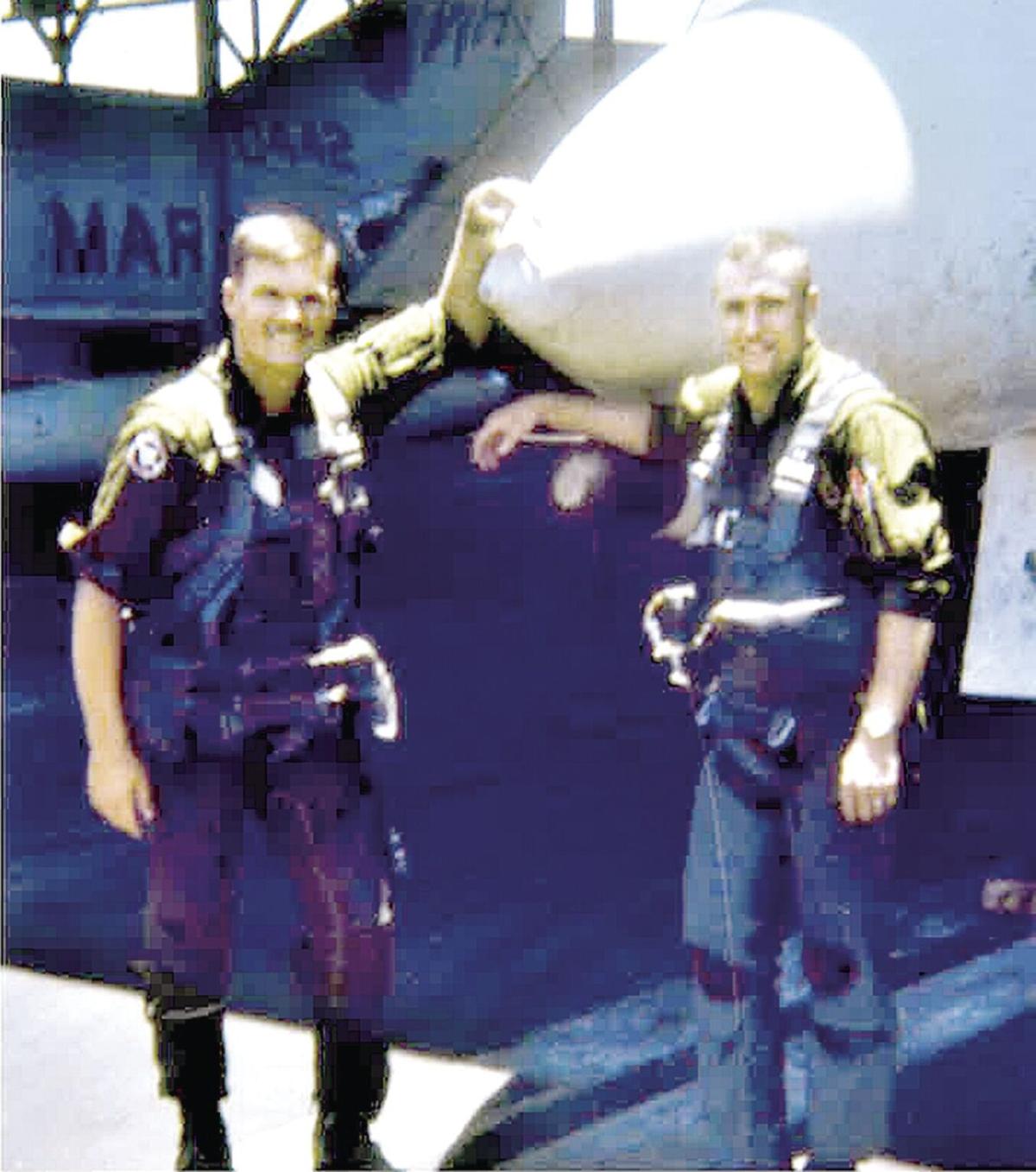 Al Graf (right) and his partner Jerry Zimmer were photographed shortly before their last mission together.

Marianne Graf-Thomas strokes her late husband, Al Graf’s, wedding ring fondly. Graf’s plane was shot down in the Vietnam jungle in 1969, but his ring made its way home to Marianne on Valentine’s Day this year.

Al Graf (right) and his partner Jerry Zimmer were photographed shortly before their last mission together.

“I know Al’s coming home because he told me he would. He wouldn’t have sent me on this mission if he wasn’t coming home.”

Marianne Graf-Thomas has clung to that hope for over 50 years, ever since officers knocked on her door in Beaufort, SC September 4, 1969 and told her Al’s plane had gone down a few days earlier.

This year part of Al did come home. His wedding band was returned to her, arriving in the mail on Valentine’s Day.

“It was delivered the morning of Valentine’s Day. It fits my hand perfectly!” Graf-Thomas says. “I saved the box because I thought, ‘nobody will believe that’.”

“There wasn’t one bit of damage to this ring. They didn’t have to polish it. There were no dings on it. Al kept it safely for me for 50 years,” Graf-Thomas says, smiling.

Graf-Thomas fell to her knees all those years ago, struggling to process the news. Her proud Marine was missing in action, they said, somewhere in the jungles of Vietnam, but Graf-Thomas knew her beloved husband of hardly a year was dead. She’d had a premonition days earlier, Graf-Thomas recalls.

A marker now bears his name at Arlington Cemetery. She visited him there just last year, commemorating the 50th anniversary of his death, but a visit to that marker wasn’t close enough for Graf-Thomas.

When she began to process her grief a decade ago after so many years of pushing it from her mind, Graf-Thomas traveled to the jungles of Vietnam.

“When you get off the plane, it’s like somebody throws an electric blanket in your face. You can’t breathe, sweating. You don’t have a dry stitch on,” Thomas describes of the Vietnam jungle.

She walked through the rice paddies where Marine co-pilot Al Graf likely lugged his heavy backpack and gear, and up a steep mountain as close to where his plane went down as she could get. She saw the thick bamboo vines covered in long black thorns that would have plagued Al and his fellow Marines, and she asked for Al’s help climbing that mountain.

Graf-Thomas made it. And, she planted a steel cross marker for Al. By now a field of flowers where Graf-Thomas strewed seed bloom at 4 p.m. every afternoon she hopes.

“Leaving there was the hardest thing in the world to do,” Graf-Thomas recalls, holding back tears.

She’s been to Vietnam four times now with Vietnam Battle Tours. The first time occurred a decade ago. That trip launched her journey through grief she’d kept locked up for years.

“I couldn’t do anything when I was 20 years old. I didn’t know what to do,” Graf-Thomas says. “You can’t close the book. You can write another chapter, but you can’t close that book.”

Write a book, she did.

Graf-Thomas returned to Beaufort sometime after her first trip to ‘Nam, and for a month she re-lived her life with Al there, staying in quarters on base where she could hear the familiar sounds of planes taking off and landing. Those sounds and visits to the couple’s first home, the church where they were married in December 1968, took her back in time as she penned a journal of the young couple’s life together.

“I just knew I needed to go home  — to what was our home,” Graf-Thomas says. “Beaufort was my healing place. I went back to the place where we were married.”

The 150-page journal is vividly detailed, as if Graf-Thomas wrote those entries while living them 50 years ago. She includes excerpts of letters she and Al wrote each other while he was stationed in Vietnam.

“Al and I wrote that together. It’s our story,” Graf-Thomas says. “I would write and I would cry … When I reconnected, it was like I lost him twice, and it was just as bad the second time.”

Fifty years ago Al told her not to cry. So she didn’t. She moved on as best she could, remarrying a Navy man and giving birth to a daughter, Laurel.

“I had to put him away to survive,” Graf-Thomas explains.

His name was never mentioned again in her family, she says.

Vietnam War veterans were largely forgotten, unappreciated when they returned home to a country where most disapproved of the war, or didn’t care at all. But, their wives and the widows were forgotten, too.

Al’s things were left in a box on Graf-Thomas’ front porch a few weeks after that fateful visit from the Marine Casualty officer. She was devastated to find his wedding ring and a watch she gave him on his 24th birthday were not among them. His flag came in the mail one day; so did medals Al was awarded, but there was never a ceremony or presentation in his honor. She wishes there had been one  — not for her benefit, but for his.

“It was just a terrible time. There was no support,” Graf-Thomas says. “I really don’t blame anybody. It was just a different time. Nobody knew what to do with us … so they just didn’t do anything.”

In the late 1990s, Al’s family received a letter claiming there was no hope of recovering Al’s remains, but in 2008 or 2009 excavators discovered they had been digging more than a mile from where Al Graf and Jerry Zimmer’s plane actually went down. Marine daily log reports helped identify the exact location approximately 12 miles from Da Nang, renewing Graf-Thomas’ hope that something of Al’s would be found.

Still, a casualty officer cautioned Graf-Thomas they may not find any personal effects. Marines were told not to wear anything identifiable in case of capture. Then Graf-Thomas was thumbing through a magazine one day and froze.

“My heart literally stopped, and I thought I was seeing a ghost,” Graf-Thomas says.

She was staring at a photo of Al and his partner, Jerry Zimmer. The men stood casually next to an F-4B, ready to head out on a mission, and Al’s watch and gold band were clearly visible, glimmering in the sunlight. She showed that photo and described the wedding band to the casualty officer.

In 2012, excavators found pieces of a plane with identification numbers proving they were indeed digging in the right spot, but Graf-Thomas already knew that. She returned to Beaufort to write her journal the same year and had a premonition that something of Al’s had been found. Two years later she received his Christian medal, uncovered at the dig site.

Perhaps the medal and Al’s wedding ring are the only bits of her wartime husband that will come home, and if so, Graf-Thomas is at peace. But, until she takes her last breath, she’ll hold out hoping his remains will be at long last laid to rest on American soil, too.

If Al doesn’t come home before Graf-Thomas dies, she’s requested part of her ashes be spread in Vietnam, and the rest buried in Arlington where Al’s marker is. If Al returns to Arlington before she dies, then all of Graf-Thomas’ ashes will go to Arlington, too, and her name engraved on the back of his marker.

Graf-Thomas is a deeply spiritual woman  — she’d have to be to hold her hope in Al’s return for all these years  — but she still questions why God took Al at times.

“God and I still have to talk. I know that He allows Al to connect with me,” Graf-Thomas says. “But, (Al) could have given so much more to the world. The guy never had a bad day … He could walk in and just make everybody feel better.”

Graf-Thomas is grateful to have finally processed her grief over Al’s death, but still struggles to say died, and doesn’t feel that she’ll ever truly get over her first love.

That’s not to say 71-year-old Graf-Thomas hasn’t enjoyed her life in the years since Al’s death. She’s worked several fulfilling careers, including a short stint as a flight attendant, and running her own restaurant in St. Marys. She’s an accomplished cook, although she won’t call herself a “chef,” and has authored a widely-read Southern cookbook.

Graf Thomas’ latest adventure is raising chickens and ducks, collecting eggs, gardening and canning jams and jellies in the old Blount family home here in Pierce County where she moved in 2014. Her grandfather, Charlie Blount Sr., once ran the farm she now lives adjacent to.