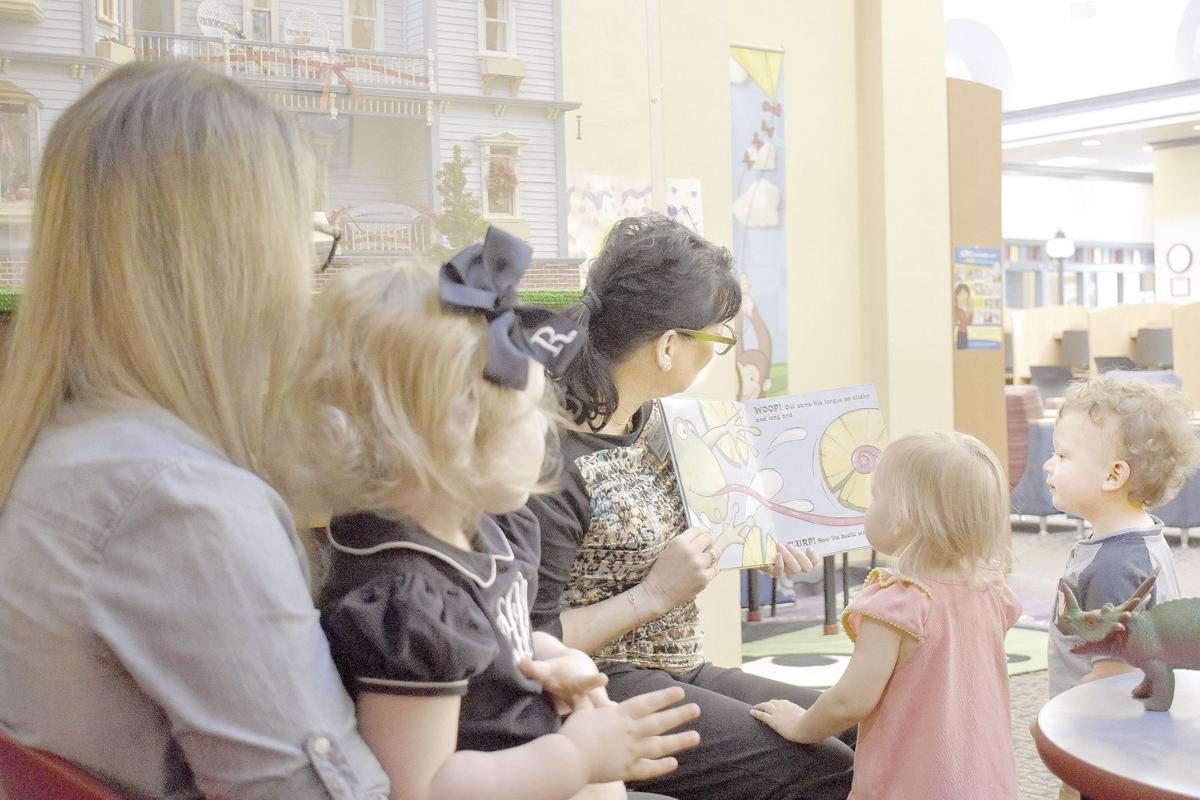 Leora Arnold and Matthew Dixon get up for a closer look at “The Icky Sticky Frog” while Library Manager Kimberly Dukes reads the popular children’s book during Toddler Time. Riley Ann Quick listens to the story from the comfort of her mother’s lap. 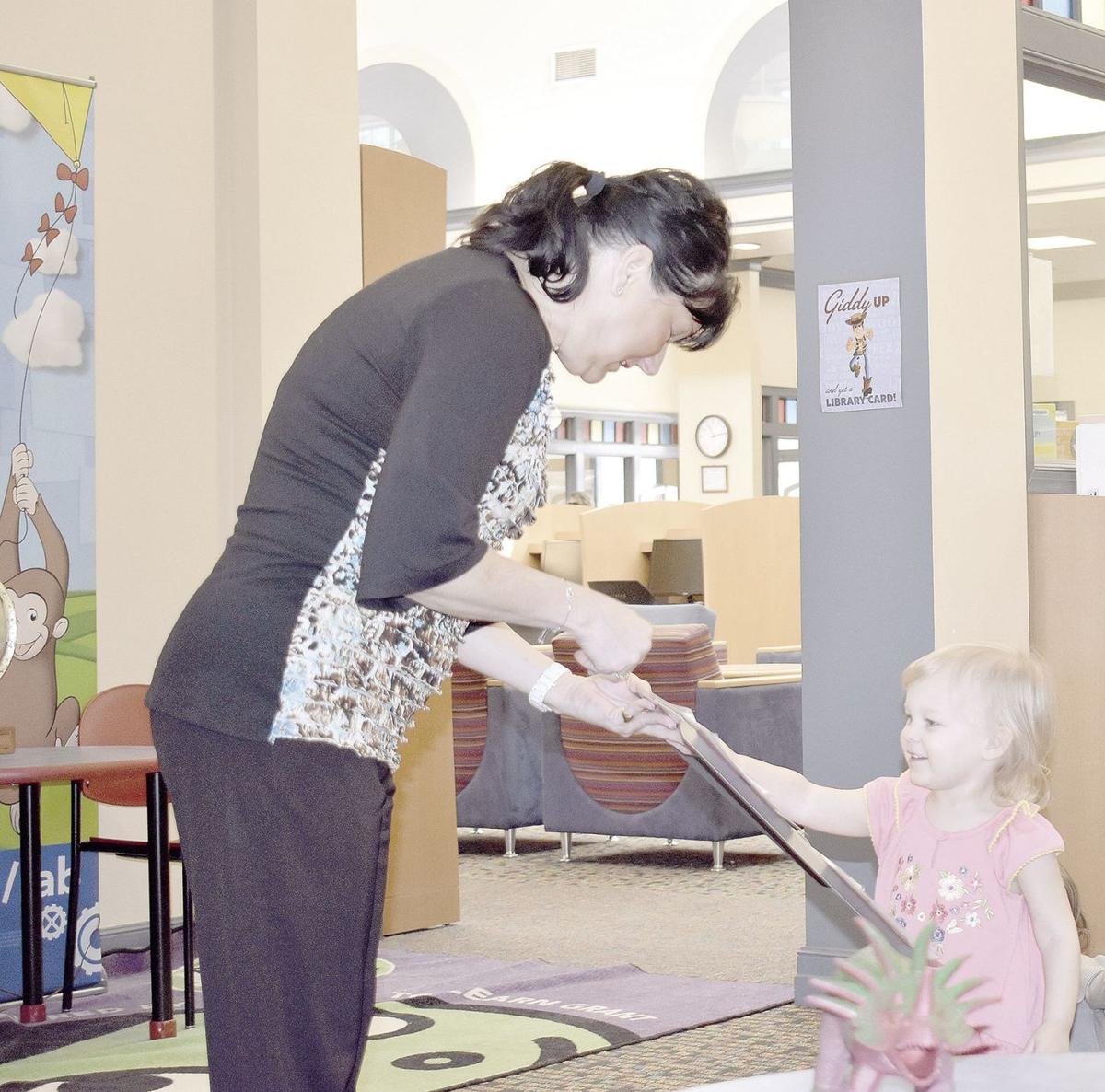 Leora Arnold looks for the mouse during a game at Toddler Time while Library Manager Kimberly Dukes holds the board. Toddler Time is one of Pierce County Library’s newest, and most successful programs.

Leora Arnold and Matthew Dixon get up for a closer look at “The Icky Sticky Frog” while Library Manager Kimberly Dukes reads the popular children’s book during Toddler Time. Riley Ann Quick listens to the story from the comfort of her mother’s lap.

Leora Arnold looks for the mouse during a game at Toddler Time while Library Manager Kimberly Dukes holds the board. Toddler Time is one of Pierce County Library’s newest, and most successful programs.

Our library is one of the top in the state.

The recognition is one of several Georgia Public Library awards given annually. OKRLS consists of five branches in Pierce, Ware, Bacon, Clinch and Appling counties.

“I was stunned a little bit,” says Pierce County Library Director Kimberly Dukes. “I love this job so much it’s not work ... For it (the system) to be recognized like that is really something.”

The  Georgia Public Library Awards were announced January 9. OKRLS was selected from 62 systems (387 branches) in the state.

“We are pleased to present the 2019 Georgia Public Library Awards to those who daily champion libraries across the state,” says State Librarian Julie Walker. “Their efforts to show that libraries are the heart of their communities, where people can achieve their goals at any stage in life, have made a meaningful difference to many.”

OKRLS was recognized for its work connecting communities and creating space for public engagement in the five Southeast Georgia counties they serve. The system strives to provide programs that actively bring people with shared interests together, offering  LEGO, textile arts, and anime clubs; a bingo group; monthly cooking program; DIY club and more. The system’s OkeCon, an annual celebration of geek culture, boasts over 500 attendees.

In comparison to much larger library systems in metro areas, Dukes suspects customer service is what makes OKRLS stand out.

“I feel like it comes down to customer service,” she says. “I think because we are so small we’re able to give more personalized service. We get to know our patrons better.”

Dukes and her staff are known for tracking down books for patrons, even hunting someone’s favorite author at a yard sale from time to time.

“Our staff members are fortunate to live and work in some of the best communities in Georgia, and these communities are at the heart of everything we do,” says OKRLS Director Martha Powers-Jones. “We make sure that each person we meet – whether in the library or through our outreach services – feels valued, respected, and connected at the library and through our services. To us, the library isn’t just a place but a service – for everyone!”

OKRLS prioritizes technology at each of their libraries, providing access to updated computers, on-site 3D printing, virtual reality systems, and a traveling STEM collection, in an effort to give students and other library patrons in rural areas access to equipment, opportunities and experiences that help them compete in a global environment.

Library systems were responsible for submitting a report detailing why they deserved the System of the Year distinction. OKRLS’ submission included recommendation letters from board members, patrons, trustees and local officials.

Dukes even filmed her Toddler Time program – an initiative she launched nearly a year ago.

“That had never been done here,” Dukes says. “Now, it’s a little community.”

Families have become friends and socialize outside of the library as a result of the program. The average age of children involved is 1-3 years old.

Other branches within OKRLS have unique programs and clubs, too. Clinch Library has a teen ambassador program, Dukes points out.

Dukes has been trying to process the significance of this award since she found out last month, but perhaps it won’t really sink in until she’s at the Capitol next month with fellow OKRLS directors to accept it.

“When we go to the Capitol maybe it’ll sink in how big this is,” she says with a laugh.

OKRLS will accept the award Thursday, Feb. 13, at the State Capitol.

A ceremony will be held at 5 p.m. Monday, Feb. 3, at the Waycross-Ware County Public Library, the system’s largest branch. And, Pierce will hold a local celebration in April.

Nominations for the Georgia Public Library Service-sponsored awards were submitted by public library directors and staff, library supporters, trustees and the general public.

Other awards given include the Lifetime Achievement Award, Librarian of the Year and Library Champion of the Year.