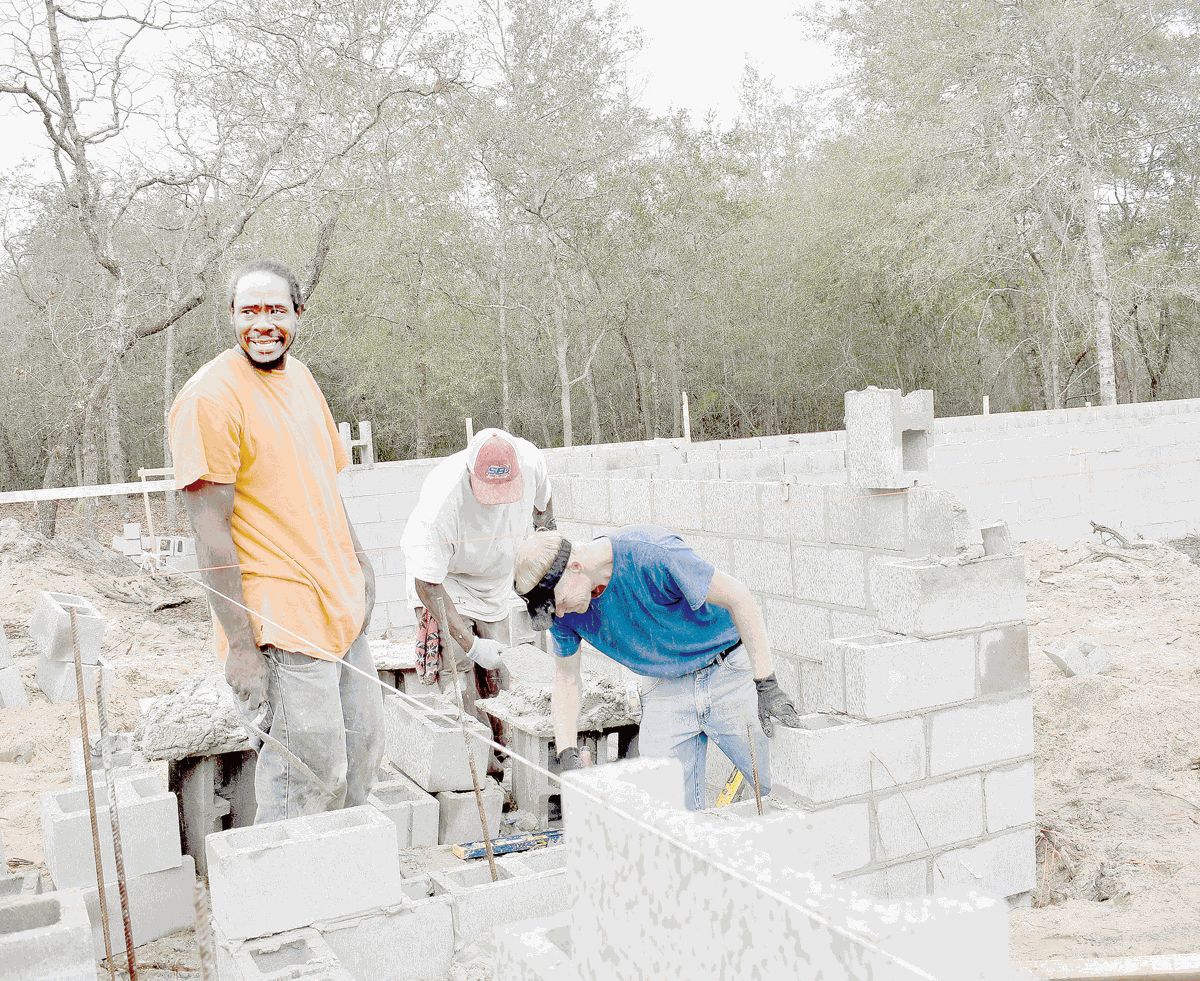 Dedrick Frazier looks toward looming storm clouds as rain threatens to delay construction on a home in Fairway Estates at the Okefenokee Country Club. Charlie Jones and Carl McLeod keep their heads down, working through the rain drops. – Photo by Sarah Tarr Gove 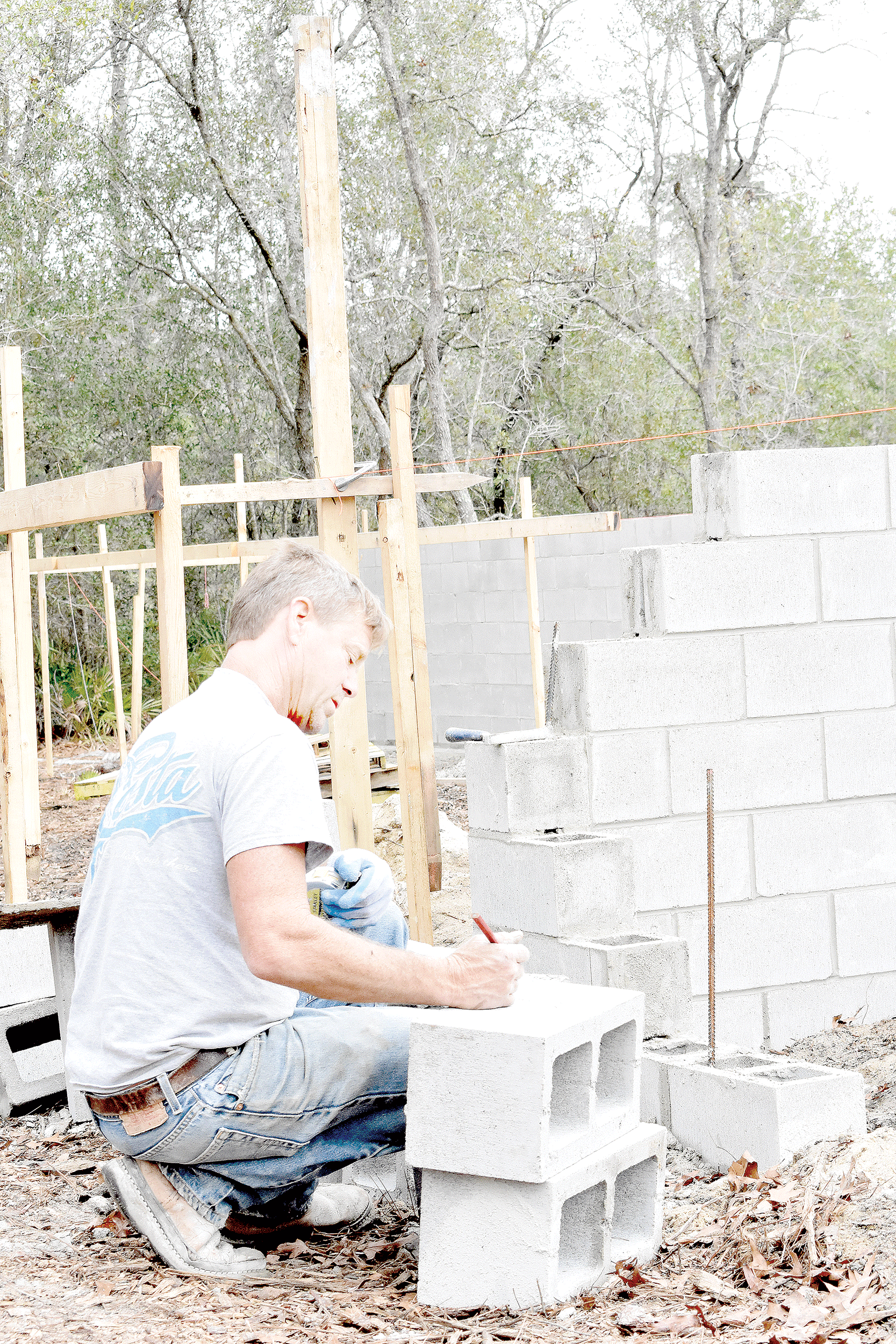 Robert Wellington, local brick, block and stone layer, takes measurements for laying block at a new home under construction inside the Okefenokee Country Club. The construction boom is keeping sub-contractors like Wellington busy.

Dedrick Frazier looks toward looming storm clouds as rain threatens to delay construction on a home in Fairway Estates at the Okefenokee Country Club. Charlie Jones and Carl McLeod keep their heads down, working through the rain drops. – Photo by Sarah Tarr Gove

Robert Wellington, local brick, block and stone layer, takes measurements for laying block at a new home under construction inside the Okefenokee Country Club. The construction boom is keeping sub-contractors like Wellington busy.

Pierce County has seen a 15 percent increase in construction in recent years.

It’s no secret the construction industry is currently booming across the United States. Construction accounts for 4.1 percent of gross domestic product (GDP) and employs 5.3 percent of the country’s entire workforce.

Sixty percent of construction activity in the U.S. is concentrated in 10 states, and Georgia is No. 8 on that list, according to a 2019 report from research firm GlobalData.

While the demand for large construction projects may be concentrated in metropolitan areas, Pierce County has also seen a steady increase in recent years, particularly in new home construction.

From 2017-2019 there has been a 15 percent increase in construction, says Code Inspector Chris Bond.

The planning and codes department issued 71 permits for single family homes last year, up from 49 in 2018 and 46 in 2017. Four permits have been issued so far this year.

Bond suspects the increase is directly related to a strong economy and low unemployment rate.

“As the unemployment rate has dropped and our nation’s overall economy is in an upswing, citizens in general are willing (and able) to build new homes,” he says.

Local developers and contractors agree, most attributing the current boom in their business directly to President Donald Trump.

“People are confident in the economy under President Trump and interest rates are low enough that they realize this is a great time to invest in a new home,” says Kirby Malone, developer with Cobblestone Builders.

“When he (Trump) got elected my business increased a minimum of 30 percent,” said Lance Thornton, local plumber. “If we get four more years out of him I’ll be tickled.”

Perry Johnson, with Elite Builders, told The Times he enjoyed a slow down at the end of last year, tying up loose ends, but was already projected to build six or seven homes in 2020.

“I hope it stays like this, if we can keep our president,” Johnson said.

Elite Builders is looking to develop land off Knox Road behind the middle school into a subdivision in the near future.

“There’s a demand for houses in that area,” Johnson says.

“The local economy is impacted positively because of the money generated from the products, services and land improvement involved,” Bond points out.

It’s challenging to pin down a dollar amount for that impact, but the money turns over several times between contractors, subcontractors, their suppliers, and employees for all of those companies.

“I am not an economist but I believe the construction value to our economy is 10 times more than just selling new homes,” Malone estimates. “All the materials are bought locally, the local employees are putting their money back into this community, permits and taxes are being collected and being used to pay others and improve this community, to keep the folks here happy and entice others to move here.”

Trends in the construction growth do point towards new people moving into the area with the intention of raising families here.

Many of the new homes in Pierce County are being constructed for young couples, (ages 30-40) and in many cases, those houses are larger than what the older generation (50 and up) are building, Bond says.

Thornton has also noticed the size of the homes he outfits with new plumbing increasing. An average new home five or six years ago was 1,800 square feet, but now those homes are 2,000-2,500 sq. feet, he says.

Malone’s company is building a lot of homes in that range at the $100K, $150K and $225K price points. Homes pricing at $300K and above are typically custom built, he says.

“Ultimately, the value of the home is measured by the square footage, interior and exterior upgrades (brick, vinyl, stucco, floor finish, cabinetry, countertop granite, marble, formica) and the location plays into effect as well,” Bond adds.

Business booming is a good thing, but not without its challenges. Finding qualified workers and getting materials in a timely manner top the list.

Contractors and subcontractors alike are struggling to find qualified labor.

“The challenges are finding workers who know what they are doing and for them to show up. With so much work going on, workers are recruited from our area,” Malone says.

That’s a problem for subcontractors as well.

“There’s no skilled labor. Help is the determining factor in anything … that’s definitely my biggest challenge  — finding skilled labor, somebody that knows the trade,” says Thornton of his plumbing business.

Thornton runs a crew of about eight employees.

Construction companies are expert at juggling multiple projects at once, but they know their limits.

Elite Builders had seven houses under construction at one time last year. It was doable, but a challenge. The weather plays a big role in contractors’ ability to keep up with several projects at once, too.

“It wasn’t too much that we couldn’t handle it,” Johnson said. “The weather is the biggest thing for us.”

Locking in subcontractors is tricky too, which can cause further delays.

“Our subcontractors haven’t been this busy in a long time. Sometimes you have to wait a couple of days to get on their schedule,” Johnson adds.

“It’s a struggle from time to time … more work than we can get to. I’m having to turn some down,” Boyette confirms.

Supply and demand seem to be well in line, but developers say the price of materials has increased, driving up the per square foot construction price. Regardless, building materials are flying off the shelves at local suppliers.

“We go through plywood, OSB (oriented strand board) like crazy. I can get it quick, but we go through it a good bit  — all lumber really,” says Duward Boatright Jr. with The Barnard Company. “Every time you turn around you have to reorder.”

Bond’s site inspections often get canceled or rescheduled because items are on backorder and did not get installed when expected. Bond performed 1,144 inspections last year.

Buyer financing delays can also slow up the process, but those are often avoidable.

“Most delays can be avoided by getting the lenders their requested information in a timely matter and not making any big decisions before final purchase of home as in switching jobs or buying a new vehicle,” Malone advises.

There may be challenges in the industry, but local construction company owners, laborers and suppliers aren’t complaining. Plenty of work means plenty of profit and they hope the trend continues.

“The potential to keep growing our area is limitless. We have great schools, an incredible community, an excellent location, and access to everything Georgia or Florida has to offer,” Malone says.

“If we keep our president I hope we keep rocking and rolling!” Johnson adds with a laugh.

Editor’s Note: National construction industry data referenced in this article was pulled from the Bureau of Economic Analysis (BEA).