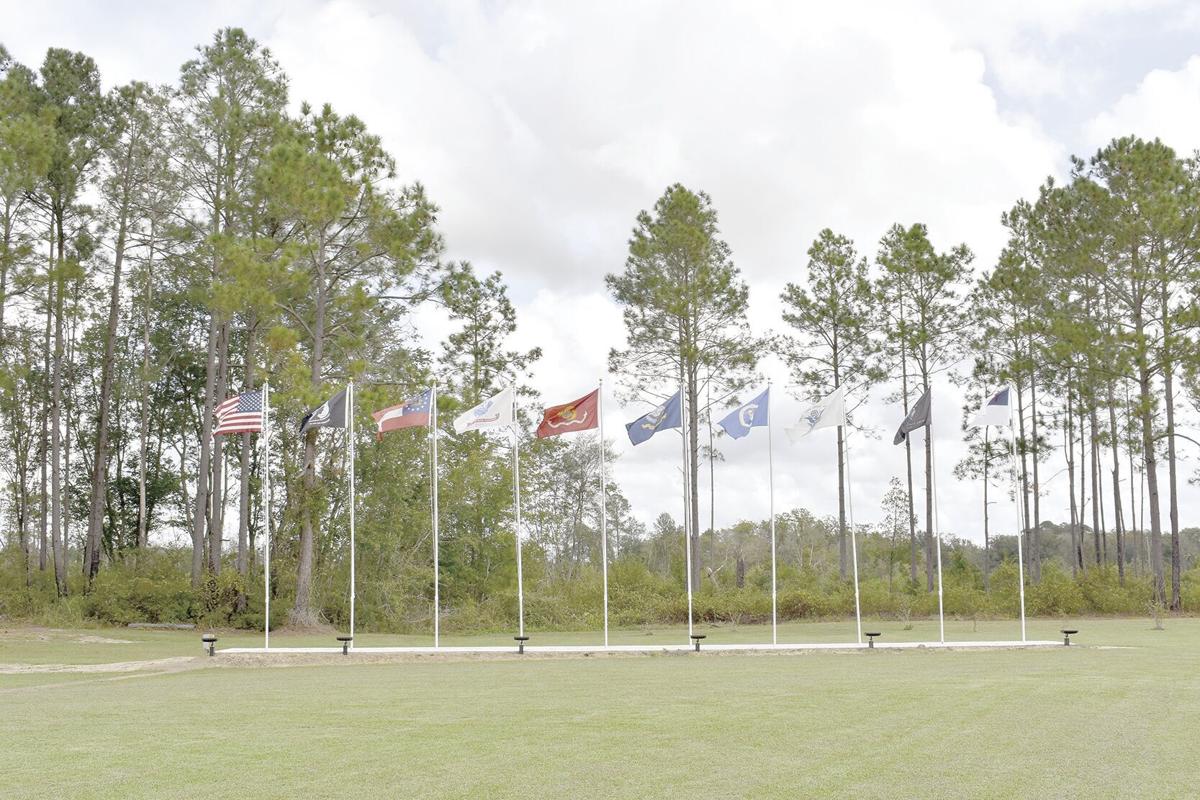 Vietnam veteran Terry Herrin built this 60 foot flag display on Trudie Road as a tribute to veterans and their sacrifices. The display includes the American and Christian flags, each military branch flag and the POW/MIA flag. 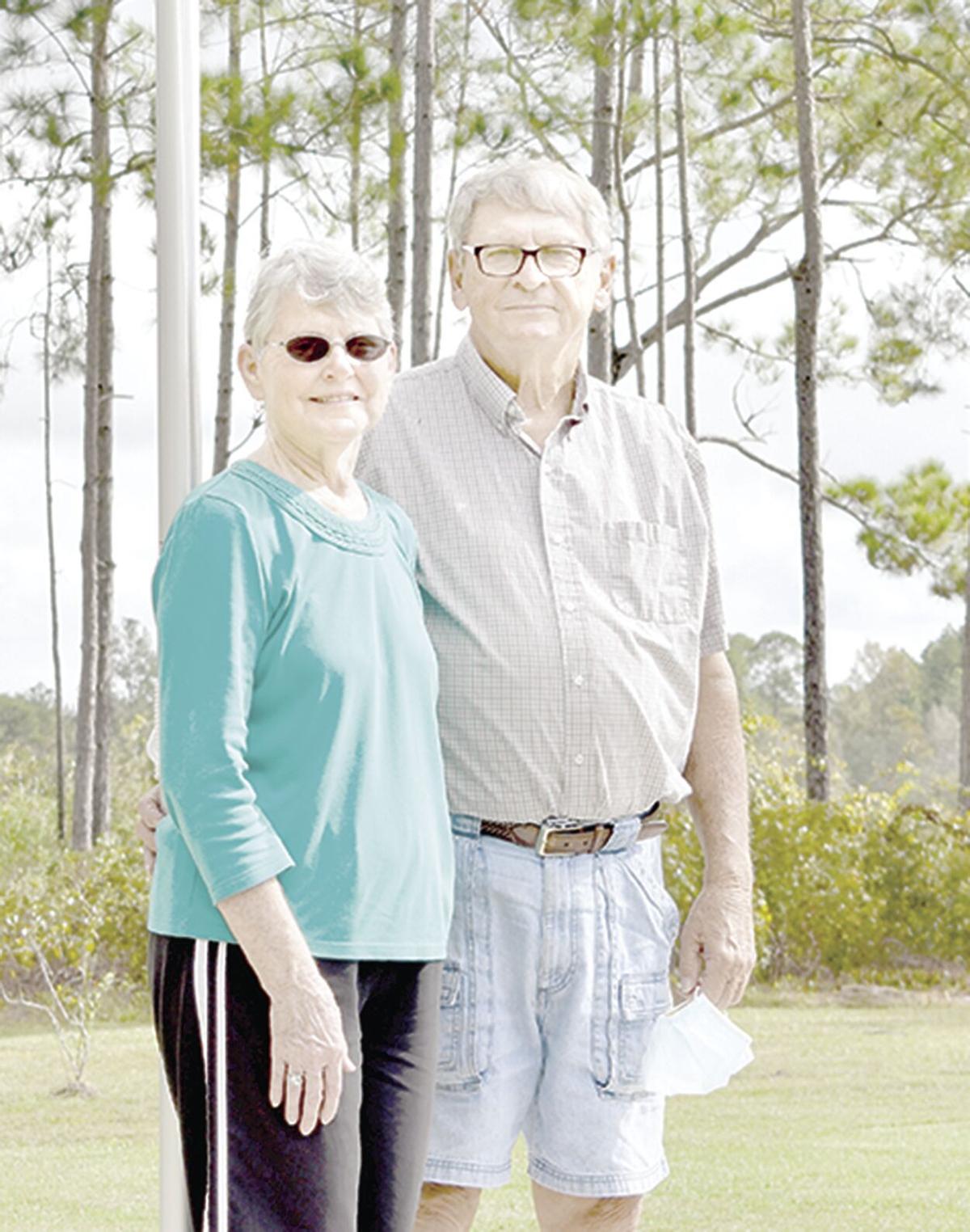 Mary Nell and Terry Herrin stand near their flag display.

Vietnam veteran Terry Herrin built this 60 foot flag display on Trudie Road as a tribute to veterans and their sacrifices. The display includes the American and Christian flags, each military branch flag and the POW/MIA flag.

Mary Nell and Terry Herrin stand near their flag display.

Terry Herrin is a quiet man who rarely speaks of his time in Vietnam, but his heart is full of love for God and country  — a fact now clearly visible in the 60-foot long, lighted flag display he’s constructed near his home on Trudie Road. The American and Christian flags serve as bookends for Herrin’s display.

“Our veterans are not given enough honor for what they have done. I’m not doing it for myself. I’m doing it for them to be recognized. It’s just a little way of giving back for having the privilege of living in our country and thanking the veterans,” Herrin says of his patriotic act.

The display was completed on a Friday, and Herrin walked out his front door the following Sunday morning to see only the Christian flag flying in the morning breeze, as if the Good Lord was expressing his pleasure with Herrin’s creation.

“It sent chills down my spine,” he says.

Passersby have been stopping quite frequently the last few weeks to admire the display and take photos. Herrin and his wife, Mary Nell, don’t mind. That’s why they put up the flags.

“We like for them to do that. We put it up for everybody to enjoy,” Mary Nell says.

Built on a former garden plot across the road from the Herrin’s home, the display is angled toward the road, fully visible to both lanes of traffic. Lush green, manicured grass surrounding the display and a quiet pond behind the flags, creates a peaceful, park-like atmosphere inviting folks to stay awhile.

The Herrins talked about their project and researched flag flying protocols for months before launching into construction. They wanted to do it right, Mary Nell says.

Initially, Herrin wanted to fly a Prisoners of War/Missing in Action (POW/MIA) flag and an American flag, but then considered flying an Army flag, too since he served active duty in the Army for nearly two years.  Herrin spent 10 months in ‘Nam in 1968-69.

Then, they decided to add each military branch flag and the Christian flag to their display.

“It kept growing,” Terry says with a laugh.

“We didn’t want to leave anybody out … we just kind of tumbled into it,” Mary Nell says.

During their research, the couple learned the American flag must fly either to the left of the display or in the center, but if placed in the center, the nation’s flag must be elevated above the others.

The American flag has to be taken down each night or lighted so as never to fly in the dark.  Mary Nell dutifully keeps a calendar marking the days the American flag is to be lowered to half-staff.

Military branch flags are to be displayed in the order the branches were established. The Herrins even included our most recently formed military branch  — the Space Force created by President Trump in 2019.

The Herrins chose to display each flag on a separate pole, and have lighted the entire display. The flags stand six feet apart.

Their sons, Eric and Clay, a neighbor, and another friend from Texas helped put the display together. The Herrins only hired out part of the concrete work, and it took just a month to build the display. Installing the lights was the most difficult part of the project which totaled approximately $4,500.

Speculation over what the Herrins were constructing out on Trudie Road got the better of some curious passersby in September and October. One person guessed outdoor toilets because of the pipes sticking up from the ground that were later used to stabilize the flag poles. Another passerby speculated the Herrins were building a sidewalk, but where was it leading to, they asked?

“Some would come by everyday,” Mary Nell recalls.

The Herrins hope their flag display, erected in honor and memory of all veterans, will serve as a reminder and educational tool for those who drive by.

“If it were not for veterans we would not have our freedom. It’s something everybody needs to know about,” Mary Nell says.

Herrin’s own experiences upon returning home from Vietnam aren’t something he likes to discuss, but are a factor in why he chose to build such a prominent flag display in honor of veterans.

“When we came home from Vietnam, we were not welcomed back. It was not a cozy feeling from the public,” Herrin says. “It’s (his time in Vietnam) something we don’t talk about an awful lot.”

Instead, Herrin’s actions speak louder than his words.

“(Dad) didn’t erect this in the center of a town but on his family farm, 10 miles away from our small town. He didn’t do it to call attention to himself or our family; he did it so he could look out of his window and be reminded of what our nation is about. It is about men and women who are willing to lay down their lives for others who they don’t know and may not agree with politically to protect our nation,” said Eric Herrin, in a recent social media tribute to his father.

Herrin is a member of the American Legion and Vietnam Veterans of America.