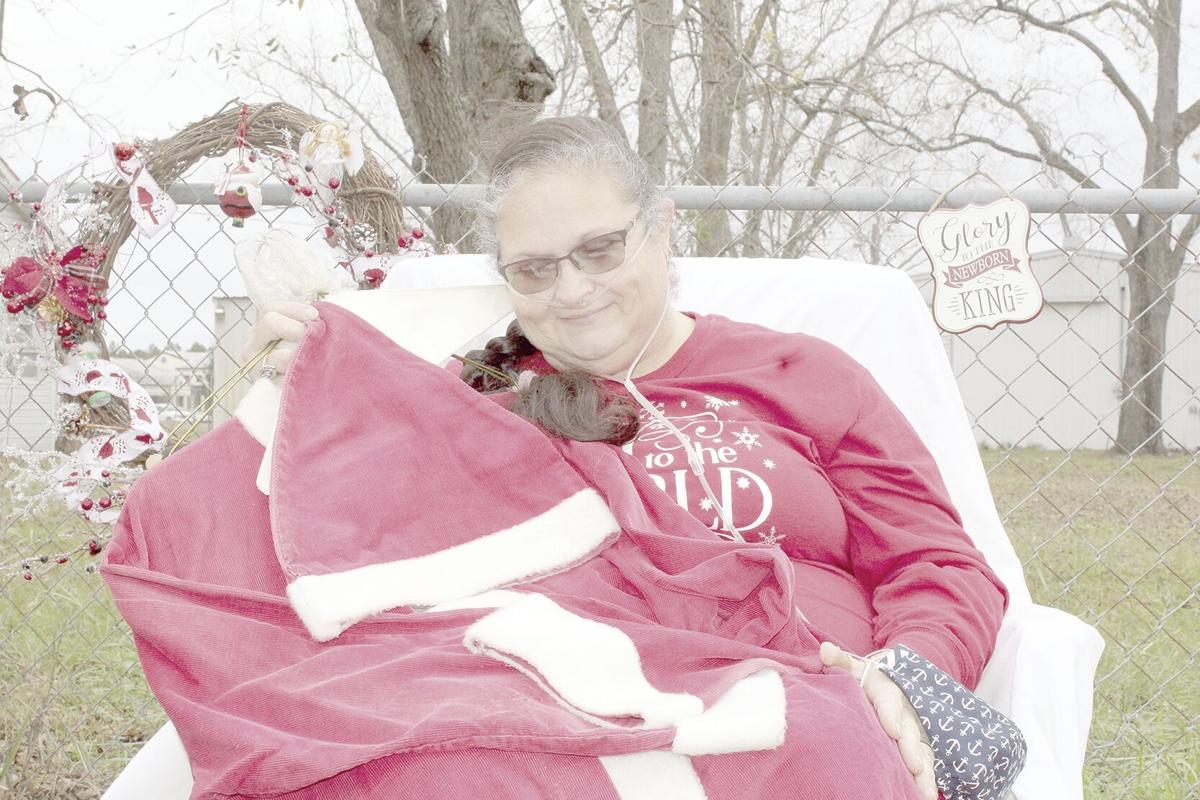 Christy Marr Hawkins gazes at one of her late father, John Marr’s, tailor made, corduroy Santa Claus suits and smiles remembering all the Christmas cheer he brought to Pierce County boys and girls. 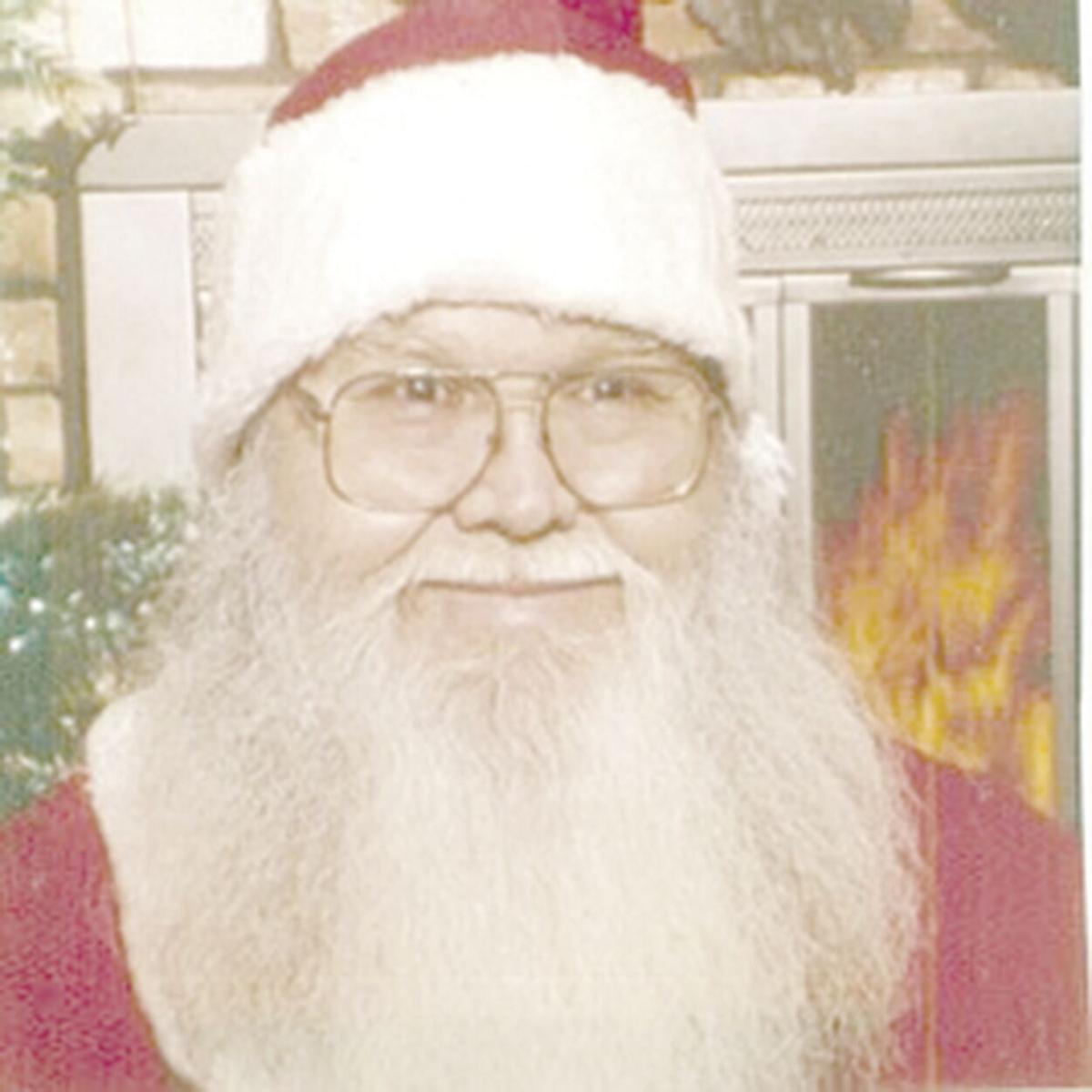 John Marr filled Santa’s boots for nearly 30 years. He’s probably best known for his role at the Waycross mall where he listened to the Christmas wishes of hundreds of good little boys and girls, relating those hopes and dreams back up to the North Pole, and for the Blackshear Christmas parades he frequented.

Christy Marr Hawkins gazes at one of her late father, John Marr’s, tailor made, corduroy Santa Claus suits and smiles remembering all the Christmas cheer he brought to Pierce County boys and girls.

John Marr filled Santa’s boots for nearly 30 years. He’s probably best known for his role at the Waycross mall where he listened to the Christmas wishes of hundreds of good little boys and girls, relating those hopes and dreams back up to the North Pole, and for the Blackshear Christmas parades he frequented.

Christy Marr Hawkins had a secret  — her daddy was Santa.

“As long as I can remember daddy was Santa Claus,” Hawkins says. “He spread that Christmas cheer.”

When Hawkins and her sister, Mary Alice, were small, Marr would skip next door to change into his Santa suit before a party or community event so as not to spoil the secret. But, when Hawkins discovered her daddy’s good deed as a teenager, she was proud of their family secret.

“I thought ‘nice’ my daddy does something good,” Hawkins says, reflecting back to when she first learned of her daddy’s Christmas duties. “It was special to know that my daddy brought joy to kids.”

She even joined him as one of Santa’s helpers during her teen years when Marr filled Santa’s boots at J.C. Penney. He’s probably best known around town as the longtime Blackshear Christmas parade Santa, but Marr frequented Western Auto, visited area medical offices, the hospital, parties and all kinds of holiday events during his nearly three decades as Pierce County’s jolliest citizen.

“He would just stop in different places,” Hawkins recalls.

Marr also met with eager little tykes at the mall in Waycross for years. He was always gentle, never forcing a timid child to take a photo. Sometimes he’d wander off from his chair so parents could get the child settled. Then he’d sneak back in behind the seat for a quick click of the camera.

In the true spirit of the season, Marr was mindful never to set a child up for broken dreams on Christmas morning. He chose his words carefully.

“He never promised a child they would get (what they asked for),” Hawkins says. “He would say, ‘We’ll see what we can do.’”

Marr was Santa to many in the area. He looked the part, he acted the part, and he carried the spirit of Christmas with him all year long.

Hawkins recalls walking in the mall one holiday season to hear her daddy singing Jingle Bells while he waited on the next child to make a visit to Santa’s booth. It gave her chills.

“I had this warm, fuzzy feeling. That was my daddy. He was in his element,” she says.

The longer Marr played Santa the more authentic he aimed to be. He soon had suits tailor made out of red corduroy. Hawkins treasures those suits now. Marr grew out his own beard, shaving it every January and letting it grow from June until Christmas. One year he even bleached it snowy white.

His jolly belly made a believer out of one little boy tugging on Marr’s Santa coat.

“That’s not real. You’ve got a pillow under there,” the youngster claimed.

He took Marr up on the challenge, delivering his best gut punch.

“He pulled his fist back and looked up at daddy, then ran for his mama,” Hawkins says.

His impressive size is probably what prompted Marr to take up the role as Santa Claus, Hawkins suspects.

“Even in high school, the guys would line up across from him on the football field and sidestep when the ball snapped,” she says.

Marr died in the late ‘90s. It’s been years since he donned a Santa suit and bellowed out “Merry Christmas” along the parade route, but Hawkins still sizes Santa up by her daddy. Few measure up to his standards.

“I’m always critiquing them compared to what daddy was,” she says with a chuckle. “Daddy had that heart, that essence of Santa.”

Marr made the magic of Christmas real for many people, but Hawkins says her family never lost sight of the real meaning of Christmas  — the birth of our Savior.

The Christmas season holds a special place in Hawkins’ heart. She feels closest to her beloved daddy this time of year. It’s almost as if he’s greeting her in every holiday jingle bursting through the airwaves, the twinkle of Christmas lights on a drive through town or even winking at her from brightly wrapped gifts placed under the tree.

Her daddy was Santa.

Editor’s Note: Marr was the chief, locally, among Santa’s helpers, that worldwide cadre of volunteers who donate their time impersonating the real St. Nick because the demands on his time require many helpers to handle all the meet and greet duties as Christmas approaches.