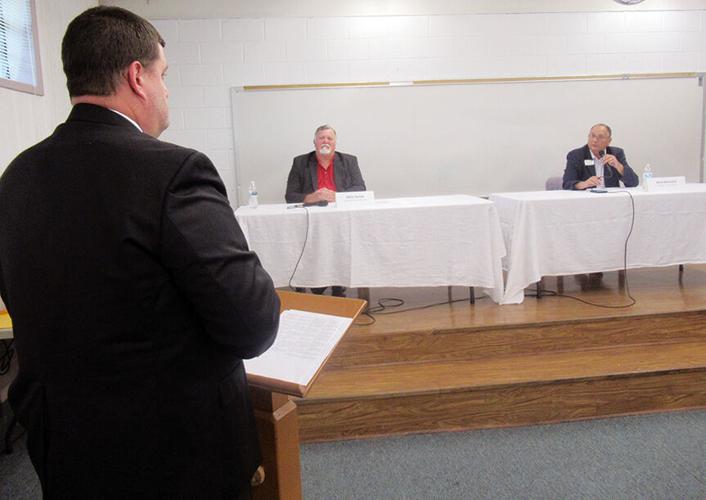 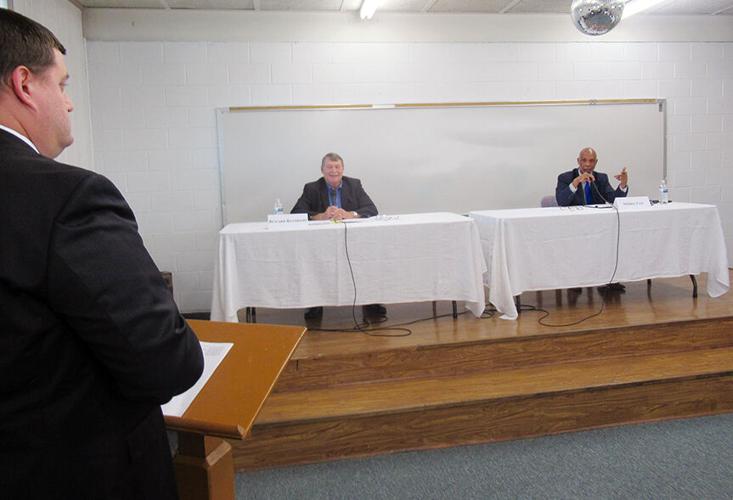 It was standing room only at the May 5 political forum hosted by The Blackshear Times and the Edward “Bud” Newton Center on Tyre Bridge Road in Patterson.

Candidates for Pierce County chairman and school board chair, as well as candidates from county commission district 2 and a Patterson City Council candidate, were on hand to do their best at wooing the crowd and gaining votes.

The 90-minute event also was streamed live on The Blackshear Times’ Facebook page and is still available to view.

Candidates were asked questions by Times’ Publisher Matt Gardner and News Editor Jason Deal that had either been emailed to The Times, written on index cards passed out during the forum, or were simply deemed important enough by The Times to warrant a response by candidates.

Candidates’ opening and closing statements and their answers to questions were strictly limited to 1 minute each.

First up were school board chairman candidates Duward Boatright, a 16-year board member, and local pastor Morris Pate.

Board of Education Chairman

Boatright, a father of three PCHS graduates, had been appointed board chairman in 2002 upon the resignation of Linda Zechmann. He’d been in the middle of his fourth term representing District 4 when he was appointed chair. Should he be elected, it would be his first term as chair selected by voters.

In his opening statement, Boatright said he feels like we have a great school system.

“I want to be sure we keep an excellent set of standards,” the grandfather of four said, adding he hopes to help keep the millage rate down.

“I served as chairman of the Pierce County Family Connection Executive Board and I was a past moderator of the St. John Missionary Baptist Association,” the father of two PCHS graduates said before running out of time.

The two fielded questions ranging from what to do with the old high school, school safety and to how to make board members more accessible, to how they felt about Common Core, teacher raises and whether there should be a school tax exemption for residents over the age of 62.

“If we work together, everything gets better!” is Pate’s campaign motto.

Boatright said the matter of the old high school is the next thing on the board’s project list and that they need to decide whether to keep the gym or tear it down.

When it comes to school safety and arming teachers, Boatright said there are already cameras in place and active shooter drills.

“I think we’re pretty well prepared,” he said, adding he doesn’t like the idea of arming teachers, saying the board had talked about it some, but that it would have to be left up to individual schools.

Pate agreed with him on that one.

“That’s a very tough situation to put a teacher in,” Pate said. “We need to have more conversation and input on that.”

As for a tax exemption for seniors, Pate said he was approached by a business owner about that recently and he told the person he was running for school board – not county commission.

“So he got a little mixed up with that,” Pate said.

Boatright, on the other hand, said that’s something the school board would need to discuss with the county commission.

“I think if their income is a certain amount, it’s only a percent, so if they make about $30,000 they might not be exempt,” he explained.

The county commission has the authority to levy school taxes.

The senior tax exemption was first discussed several years ago. While it would aid senior citizens, the exemption would also create a hole in the school board budget that would have to be filled by a millage rate increase or cuts in spending.

The question about whether they support Common Core and the importance of music and art didn’t yield much from either candidate.

“I’m for teaching academics and sticking with that,” Boatright said. “As far as the arts, we have that and are doing very well with that. We’ve won several championships.”

Pate said he agreed with Boatright, “I think for the first time.”

When asked about how they would address the lack of diversity in hiring, Boatright said he wasn’t sure because there’s no way of knowing an applicant’s race when they apply.

Pate, however, said it’s important to understand the perceptions applicants might have about the district from the outside.

In Pate’s closing statement, he reiterated the importance of listening to the community when decisions are being made and making sure the board is as accessible as possible.

Boatright stressed that no one disputes that parents are the district’s main stakeholders and therefore what they think matters. However, the board can’t please everyone all the time.

“Leaders are forced to make hard decisions and some are going to agree with it and some aren’t,” he said. “If someone gets an answer they don’t like, it does not mean they were not heard.”

Next up in the hot seat were current Pierce County Chairman Neal Bennett and his challenger Mike Streat, who is giving up his District 2 commission seat to run for chairman. Both are Republicans.

Event moderator Deal reminded those in attendance that the county chairman race is partisan, meaning voters must declare a party preference when they go to the polls May 24 or take part in early voting currently happening. There is no Democratic opposition, so whomever wins the race will be chair in January.

Bennett, a 1976 graduate of Blackshear High School, was first elected to the county commission in 1986 and served seven terms for District 1 until he gave up the seat in 2012 and was elected chairman. He is completing his second term as chairman.

Streat, a retired Amtrak engineer of 40 years, is serving his third term for District 2 and also previously served as Blackshear mayor.

Road paving was a hot topic for these two rivals.

Streat said it’s mostly a personnel issue, although he believes the new superintendent is doing a good job.

“I know we have 410 miles of dirt roads,” the father of three PCHS graduates said. “Now we’re pulling ditches and things, which takes a longer time to get around as far as grading, but when it comes to paving the roads, the financial burden is a big issue.”

“We just applied for the CDBG (Community Development Block Grant) and had 1.3 miles of new paved road in,” he explained. “The grant will fund $750,000 if we are fortunate enough to get the grant. The estimate of this project was $1.3 million. It’s three times what it used to cost.”

He agreed the new road superintendent is doing his best.

“He’s trying to devote a little more time and do a proper job,” he explained. “He wants to make sure that ditch is deep enough so when it does rain it will keep the roads from flooding.”

When it comes to enforcing the property maintenance code, Streat agreed unkempt properties are always a problem.

“We have a lot of people go out and dump and we have dilapidated houses,” he said, adding it’s difficult and time-consuming to figure out who owns the various nuisance properties.

Bennett said they already know who owns the properties and they will do their best to enforce the codes.

When asked how the two would work to ensure more access to the commission by the public, Bennett said they’ve tried holding workshops for the public a couple of weeks before the regular meetings and found that no one showed up.

He said members of the public can always request to be put on the agenda with their concerns by filling out a form a week ahead of time.

Streat said he thinks maybe videotaping the meetings again would help spark more participation by educating the public more on the issues.

The candidates also were asked where they stand on public safety and paying firefighters, but neither was willing to commit to providing funds to fire personnel.

“Public Safety is one of our biggest expenses,” Streat said. “I think it’s like 17.9 percent. “We want to be proactive and for them to do what they have to do  with ample supplies and materials.”

“The Sheriff’s budget is $3.3 million a year, or like 35% of our budget,” he said. “We want to continue to improve that just like anything else. How many deputies does the taxpayer want? Does he want 20? Does he want 10? How many is he willing to fund?”

When asked what they believe is the most important issue facing the county and how they’d handle it, Bennett said staffing and pay, while Streat said roads.

“We just recently implemented a pay raise for all our employees and that’s what’s going to help with the staffing issue,” Bennett explained. “We’re full staffed with our EMS. We’ve got people waiting in line for EMS jobs. We’ve got the road department, which is a big staffing issue. We’ve got a pay package to the tune of $879,000 and that’s huge. We’re proud of it.”

Streat said he’s had more people talk to him about the roads while he’s been out on the campaign trail than any other issue.

“We have to keep reminding them we’re working on it,” he said. “It takes two-and-a-half months for the graders to get around full circle and they’re pulling ditches, which takes longer.”

They both believed the recent pay raise is sustainable well into the future.

“We put a lot of devotion and time into that,” Bennett said. “We had a firm come in and do a study for us. With the longevity and the starting wages, we’ve got a 50-year plan. It’s there.”

Wrapping up, the two gentlemen made one last plea for the peoples’ votes.

Streat focused on his desire to make this county stand out above the rest.

“When people come in, I want them to say, ‘This is a good county.’ And when they leave say, “That was a good county and that was the nicest bunch of people I’ve ever met in my life.’”

Bennett encouraged residents to take advantage of early voting and to trust him with the county’s funds.

District two county commission candidates Shawn Godwin and Graham Raley were given the opportunity to introduce themselves to voters.

Both men are running as Republicans. There is no Democratic opposition, but Duane Hamelin is currently collecting signatures in an attempt to qualify as an independent candidate. If he does, he will face the winner of the Godwin-Raley race in November.

The winner of the seat will replace Streat, who gave it up to run for chairman.

Her opponent, Brian Herrin, had a scheduling conflict and could not attend.

The winner of the race will fill the unexpired term of Joan Teglas-Duplessis, who passed away suddenly in February.

Early voting is underway now through May 20 at the Courthouse Annex on Nicholls Street. The primary election will take place Tuesday, May 24. Voting on election day will take place at the county’s two polling stations, the Pierce County Gym in Blackshear and Eagle Station in Patterson.

What’s In The Water? Fluoridated Water And Its Benefits