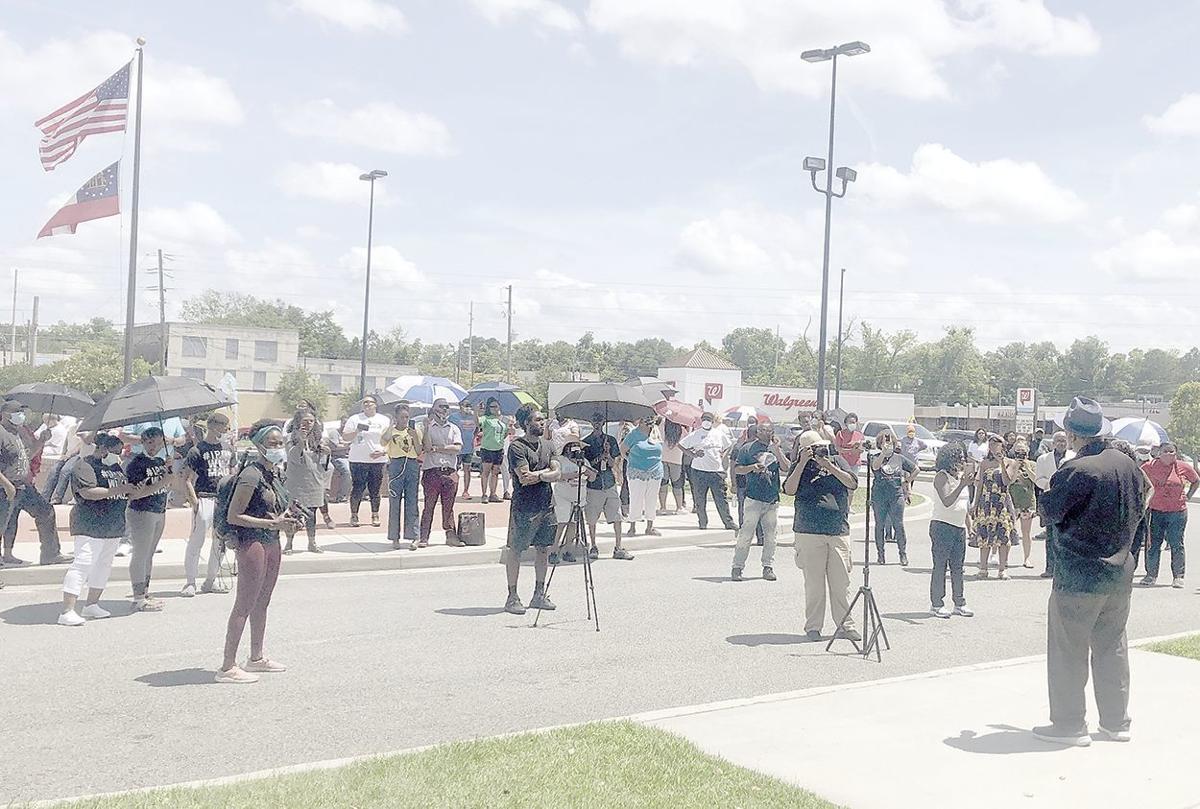 Peaceful protesters gathered on the Courthouse steps Saturday to call for George Barnhill’s resignation over his connection with the Arbery case. 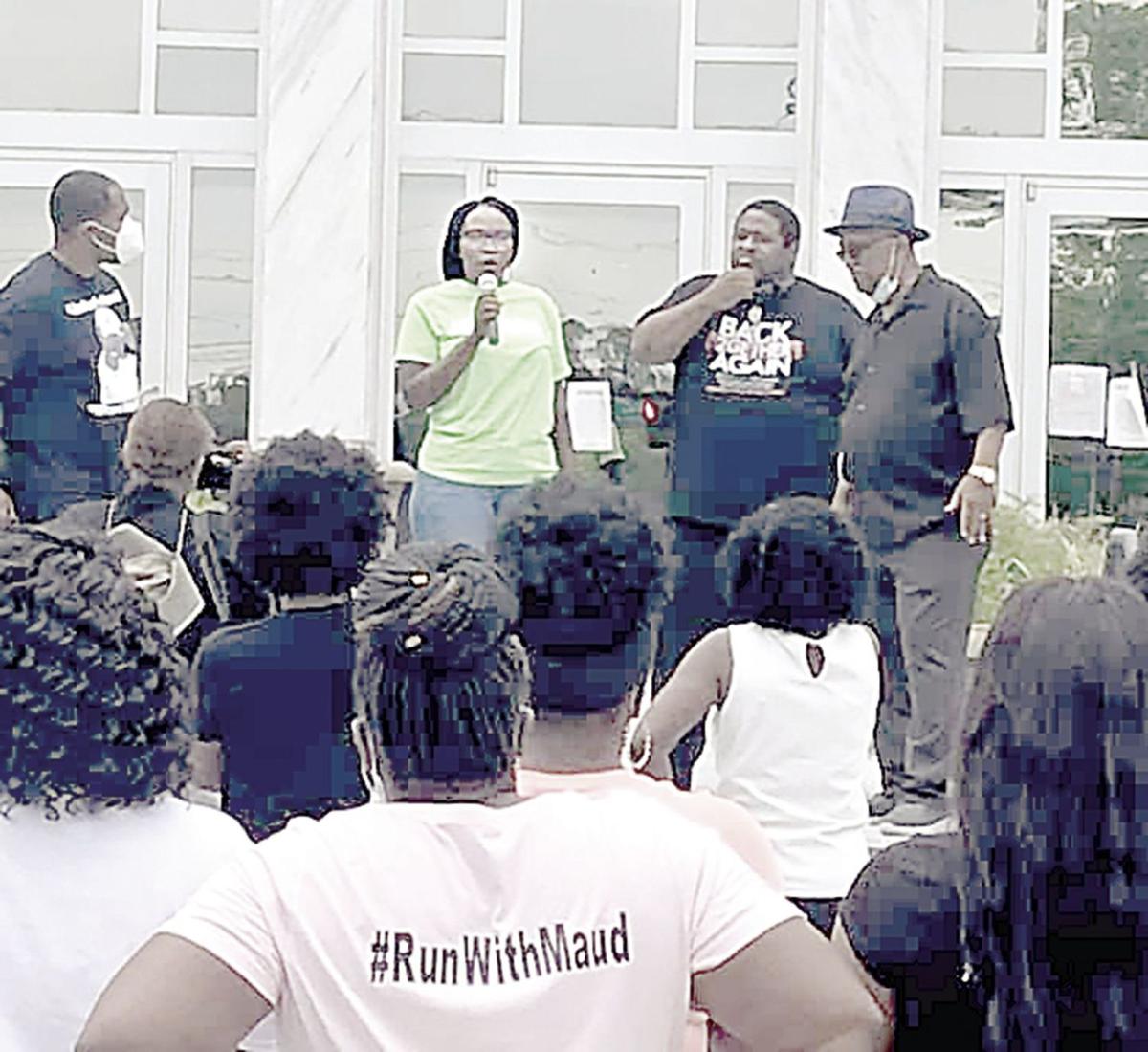 Ahmaud Arbery’s mother, Wanda Cooper-Jones, participated in Saturday’s caravan. James is pictured speaking to the crowd on the steps of the Ware County Courthouse Saturday morning. 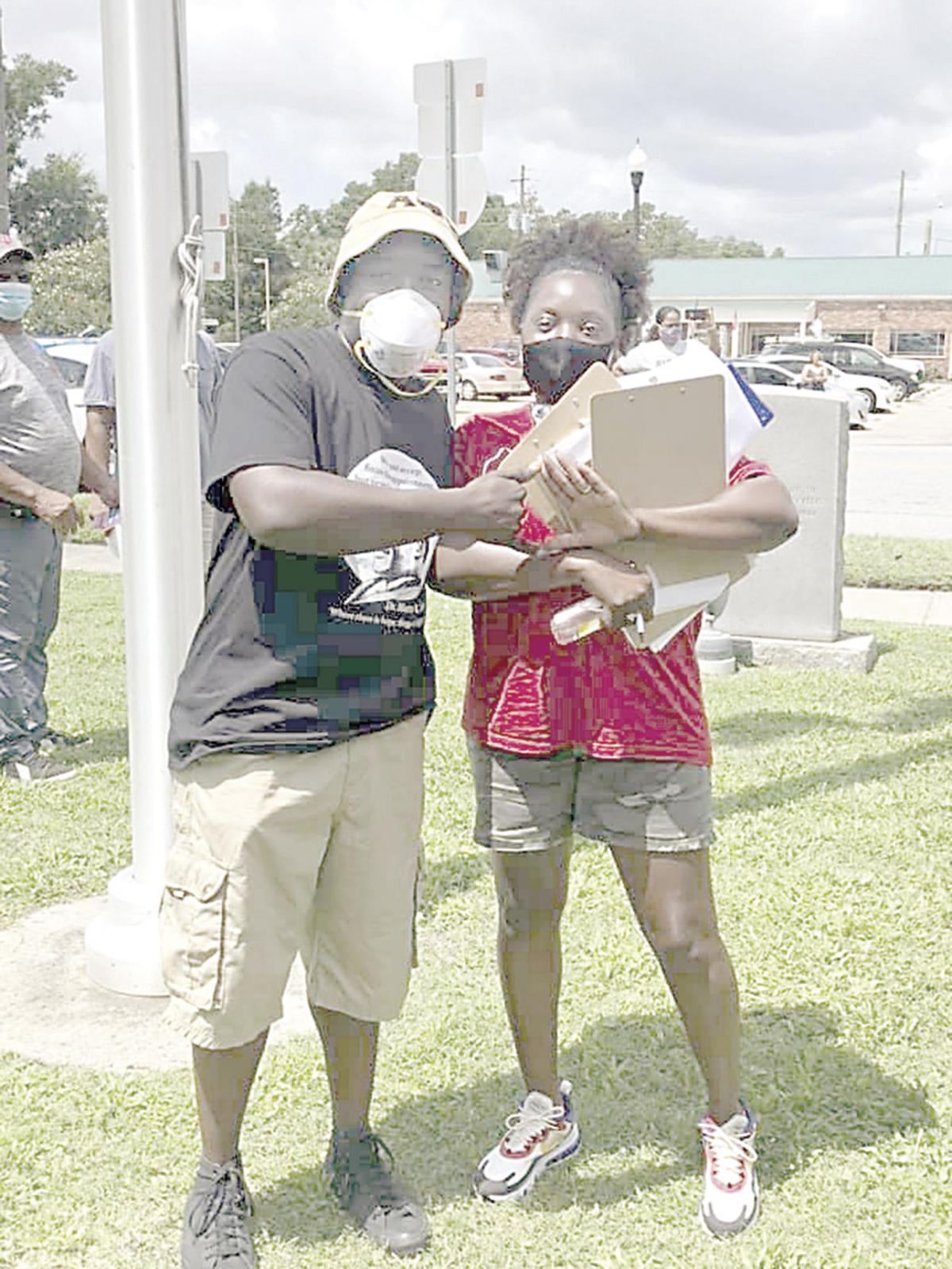 Pierce County Caravan participant Clarence Washington (left) and petition committee member Oneida Oliver-Sanders hold up their Greek fraternity/sorority sign symbolizing unity for the cause at one of the stops Saturday.

Peaceful protesters gathered on the Courthouse steps Saturday to call for George Barnhill’s resignation over his connection with the Arbery case.

Ahmaud Arbery’s mother, Wanda Cooper-Jones, participated in Saturday’s caravan. James is pictured speaking to the crowd on the steps of the Ware County Courthouse Saturday morning.

Pierce County Caravan participant Clarence Washington (left) and petition committee member Oneida Oliver-Sanders hold up their Greek fraternity/sorority sign symbolizing unity for the cause at one of the stops Saturday.

A Peaceful Protest: Call to Action

Could District Attorney George Barnhill face a petition for recall?

A local group of activists are on a mission to see that happen following Barnhill’s handling of the Ahmaud Arbery case in Glynn County. The Caravan for Justice, a six-county caravan composed of activists from each county in the Waycross Judicial District Barnhill represents, held peaceful demonstrations and petition signings for Barnhill’s recall at each county courthouse in the district Saturday, May 30.

The Rev. Fer-rell Malone, pastor of Macedonia Baptist Church in Waycross and one of the petition filers, estimates 800-1,000 people participated in at least one of the stops, but several hundred traveled to multiple stops throughout the day.

Approximately 24,000 signatures will be needed to meet the recall requirement of 30 percent of registered voters in the district supporting the measure. The caravan secured 300 signatures Saturday, and aims to acquire 300 a day as their work continues, says Oneida Oliver-Sanders, a member of the committee that filed a petition for recall.

The petition was filed Friday, May 29, at the Ware County Board of Elections by a committee who organized Saturday’s caravan and will continue to hold petition signings. The group has 90 days to acquire the needed signatures to present their petition for recall.

“It’s a lot of hard work, but we’re dedicated to getting that done,” says Clarence Washington, a Pierce Countian who participated in Saturday’s caravan.

Washington traveled with the caravan all day from 10 a.m. - 6 p.m. He has been a champion for civil rights causes since his college days at Albany State University where he served as president of student government and organized protests for Trayvon Martin and Kendrick Johnson, young black men killed in 2012 and 2013.

“It was a full, productive day,” Washington said. “It was very orderly. We had cooperation from (law enforcement) in each county, escorting us from county to county. We were able to get a lot of things done in a peaceful, but meaningful way.”

Arbery was shot and killed while running through the Satilla Shores neighborhood on a Sunday afternoon in February when Gregory McMichael, 64, and his son, Travis McMichael, 34, chased him down, reportedly suspecting him of a burglary in the neighborhood.

Gregory McMichael, a former police officer and investigator, had recently retired from the Brunswick Judicial Circuit District Attorney’s Office so the case was initially referred to Barnhill who issued a letter offering his opinion that the McMichaels were carrying their weapons legally in the process of a citizen’s arrest which ended in deadly self-defense.

Barnhill said charges were not warranted against the McMichaels in the shooting death, but recused himself April 7 for another conflict of interest. Barnhill’s son, George F. Barnhill, is an assistant district attorney in the Brunswick Judicial Circuit’s DA office. The younger Barnhill had reportedly prosecuted an earlier case in which Arbery brought a loaded weapon to a high school basketball game in 2012. G. McMichael reportedly also assisted with that case.

The McMichaels were arrested and charged with murder May 7 after video of the incident was released prompting closer scrutiny of the case, and public cries for justice to be served.

U.S. attorney with the Southern District of Georgia, Bobby Christine, is now overseeing the investigation into Barnhill and Glynn County District Attorney Jackie Johnson’s handling of the case.

The Caravan for Justice began the day with a presentation at the Ware County Courthouse before heading to Charlton, Brantley, Pierce, Bacon and Coffee County courthouses. Arbery’s mother, Wanda Cooper James, was among those who spoke at each stop as did Malone.

“We had some very strong speakers, meaningful speakers,” Washington told The Times. “She (Arbery’s mother) was very strong, but very humble.”

The caravan grew throughout the day as supporters joined up in their county and then continued on to the next stop. By the time, Caravan for Justice reached Pierce County Saturday at approximately 2 p.m., 50-60 cars were in the line up. They traveled into town to the Courthouse via Main Street, each vehicle outfitted with a yellow window flag that read “Caravan for Justice.”

The Justice Initiative, Southeast Conference of the Southern Christian Leadership Conference (SCLC), and NAACP were among the organizers for Saturday’s caravan.

To sign the recall petition, one must be a resident of one of the six counties in the Waycross Judicial Circuit: Ware, Charlton, Brantley, Pierce, Bacon and Coffee. Supporters of the petition must also be a registered voter in the district now, and two years ago when Barnhill was last elected to office.

Those interested in signing the petition may call Oliver-Sanders at 912-387-9483.

The Caravan for Justice will march from the Georgia Bar Association office in Atlanta to the Georgia Capitol June 19 for their cause.

Editor’s Note: The Times was unable to reach Barnhill for comment on this story.