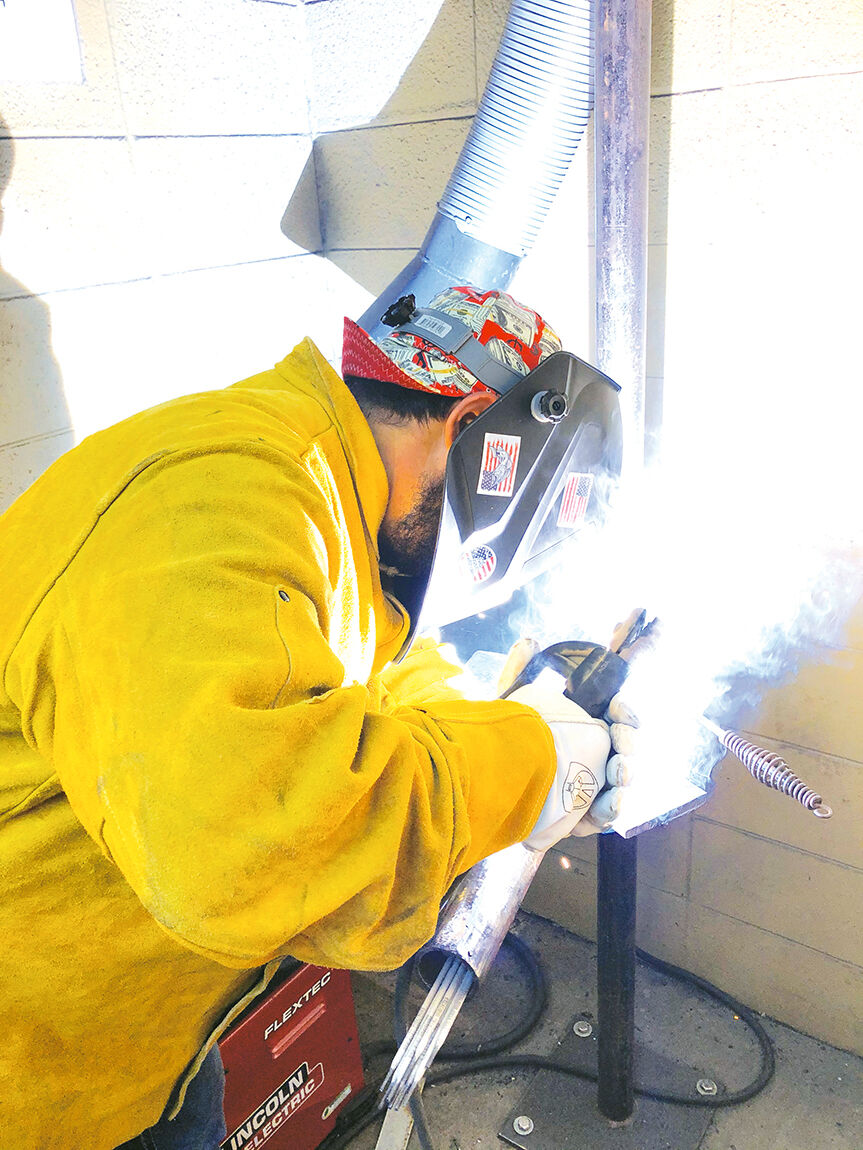 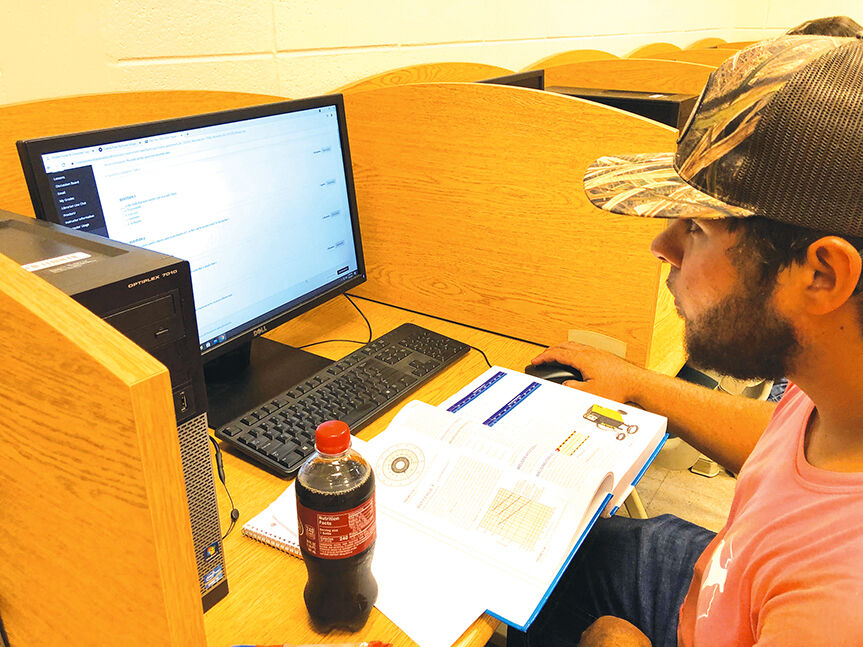 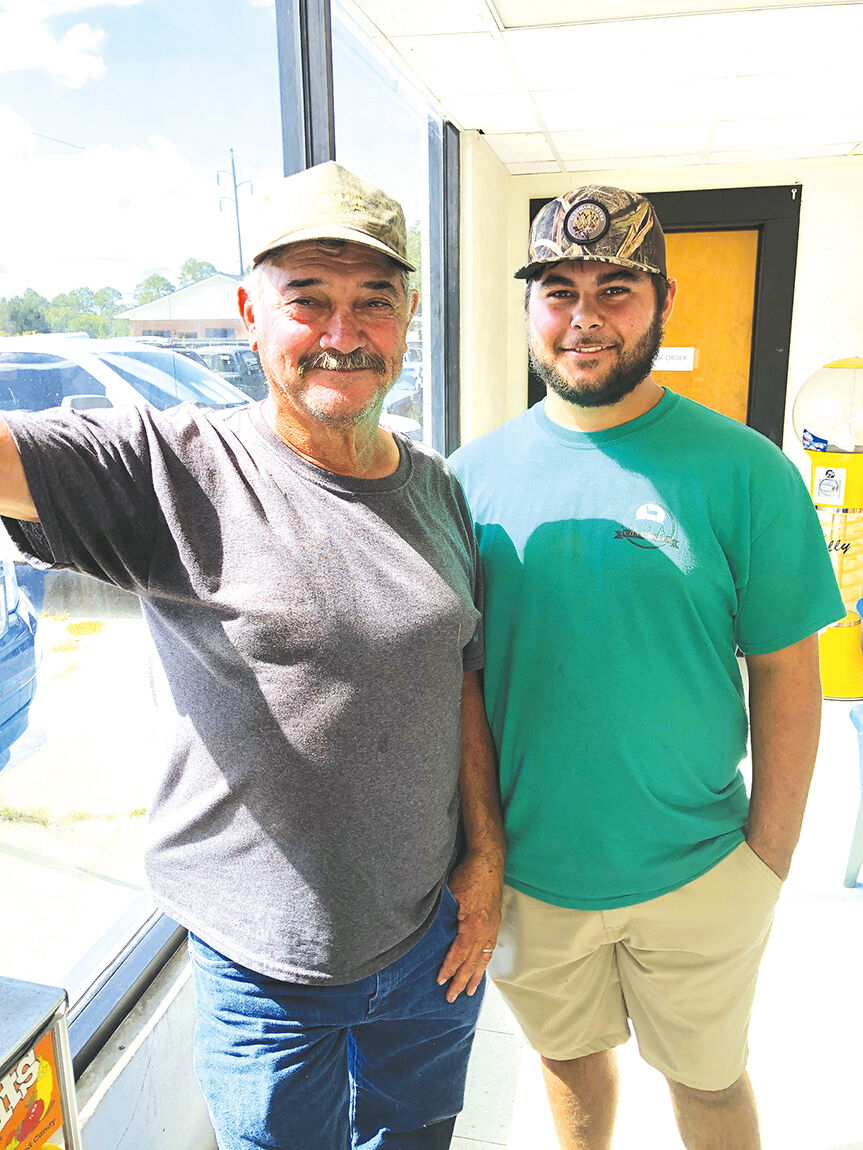 Retired Pierce County Sheriff Richard King with grandson Bryce Crews recently at Carter’s Body Shop in Blackshear. Crews has been welding at King’s Patterson farm for the past three years, which has helped prepare him for a new arc welding certificiation program at Coastal Pines Technical College in Jesup.

Retired Pierce County Sheriff Richard King with grandson Bryce Crews recently at Carter’s Body Shop in Blackshear. Crews has been welding at King’s Patterson farm for the past three years, which has helped prepare him for a new arc welding certificiation program at Coastal Pines Technical College in Jesup.

When David “Bryce” Crews gets a welding wand in his hand, all past frustrations in school seem to melt away.

“School was a struggle for me,” the 18-year-old grandson of retired Pierce County Sheriff Richard King said. “Just sitting there at a desk all day was hard. Reading was my least favorite. But I always took to welding and things like that.”

So when Crews’ Coastal Pines Technical College GED instructor Remley Farr mentioned a new CPTC Adult Education welding certification program to him this summer, he immediately jumped at the chance to become a certified welder in less time than usual — and it wouldn’t cost him a dime.

It’s all part of CPTC’s Integrated Education and Training (IET) Program that already had been offering certain Occupational Safety and Health Administration (OSHA) courses such as forklifting to meet the demands of local employers.

Although welding classes have been available at CPTC for many years now, this is the first year the school has tried this Basic Shielded Metal Arc Welding Technical Certificate of Credit (TCC) that not only hands them a certification after only four months, but comes with guaranteed job interviewsin the field.

“It’s my understanding that Bryce is the first one from Pierce County to be accepted into this new deal,” King said on a recent Friday after he and Bryce had cut a couple of Blackshear lawns on Bryce’s day off from schooling. “We’re very proud of him.”

It was mainly King who provided Crews with his first welding lessons, despite the fact that he never actually worked as a welder.

“I took a welding course at OTI 40 years ago,” King said. “Just one quarter. I did it because my wife, Pat, went there for secretarial school at night and I wanted to be there.”

King, who retired from law enforcement nine years ago after more than 35 years, has been letting Crews do a little welding here and there at his Patterson farm for the past three years.

When he was only 17, he built a 6-by-12-foot hog trailer pretty much singlehandedly by welding the metal pieces together, Crews said.

“It made me feel pretty good,” he said.

Farr said he had no idea Crews already had welding experience when he recommended him for the new welding course in conjunction with his GED work.

He just knew he was a responsible young man who was determined to make a good life for himself.

“He always comes to class, he does his work and he listens,” said Farr, who mostly helps Crews with GED reading skills in the mornings before he heads to the Jesup campus for the welding class for three-and-a-half hours every afternoon, four days a week.

Crews seemed destined to pursue welding not only because of King, but because his other two male role models —his father, Brantley Crews, and his stepfather, Justin Thorne — both work in the welding field.

“My husband is with the Local 177 Union out of Brunswick,” Crews’ mother, Amy Thorne, said, explaining he pipe fits and welds through OPI in Brunswick, doing contract work in the mills.

“That’s the cool thing about these hands-on trades,” Dowling said recently. “Even if students have had to get special attention in school with reading or whatever, once they get in that welding booth, you’d never know.”

Even classmate Ethan Patterson, 16, noticed Crews’ gift with the wand.

“This guy just does it,” said Patterson, a mechanic from Ludowici who wanted to give welding a try. “He’s like his own person. He goes in there and just does it and says, ‘OK, I’m done.’ He’s definitely not an amateur.”

Dowling, who grew up in Blackshear, said he intentionally keeps book work to a minimum so that his students can finish the online portion of the program within the first two weeks so they can spend the majority of the semester actually working on welding skills and projects.

Having worked as a structural welder himself for about 10 years, Dowling said he is intentionally strict with his 41 students in his three classes because he wants to prepare them for a field that will expect a lot out of them.

“I want to give them confidence in what they’re doing so when they get out there, they won’t have any problems,” he said. “I want them to do well because they’re a reflection on me in the end.”

Crews said he’s not sure yet where he will want to work, but  smiles when he thinks about the future. He is on track to have his career ready certificate in hand on December 14.

“I like looking at something and knowing I had a hand in building it,” said Crews, who expects to earn his GED within the next few months. “I’m glad I found out about this program. I feel I’ve already learned quite a bit.”

For more information about the CPTC IET welding program or to find out about a construction course being added in the spring, call 912-338-5262 or go to www.coastalpines.edu.