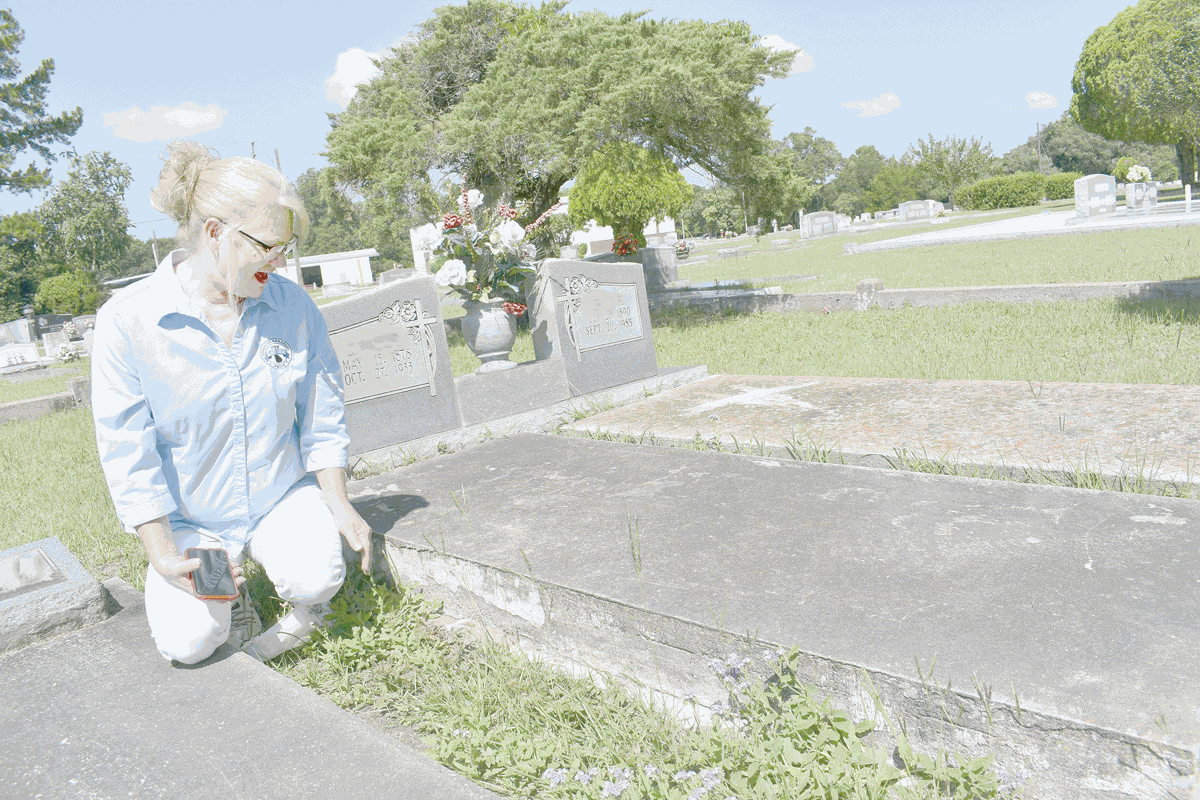 Shelia Turner, Blackshear Public Works Dept. secretary, points to a brick foundation underneath a concrete slab grave in the city cemetery. When the original red brick grave topper begins to decay, a grave is repaired by pouring a concrete slab over the brick. (The names are intentionally blurred from tombstone.) 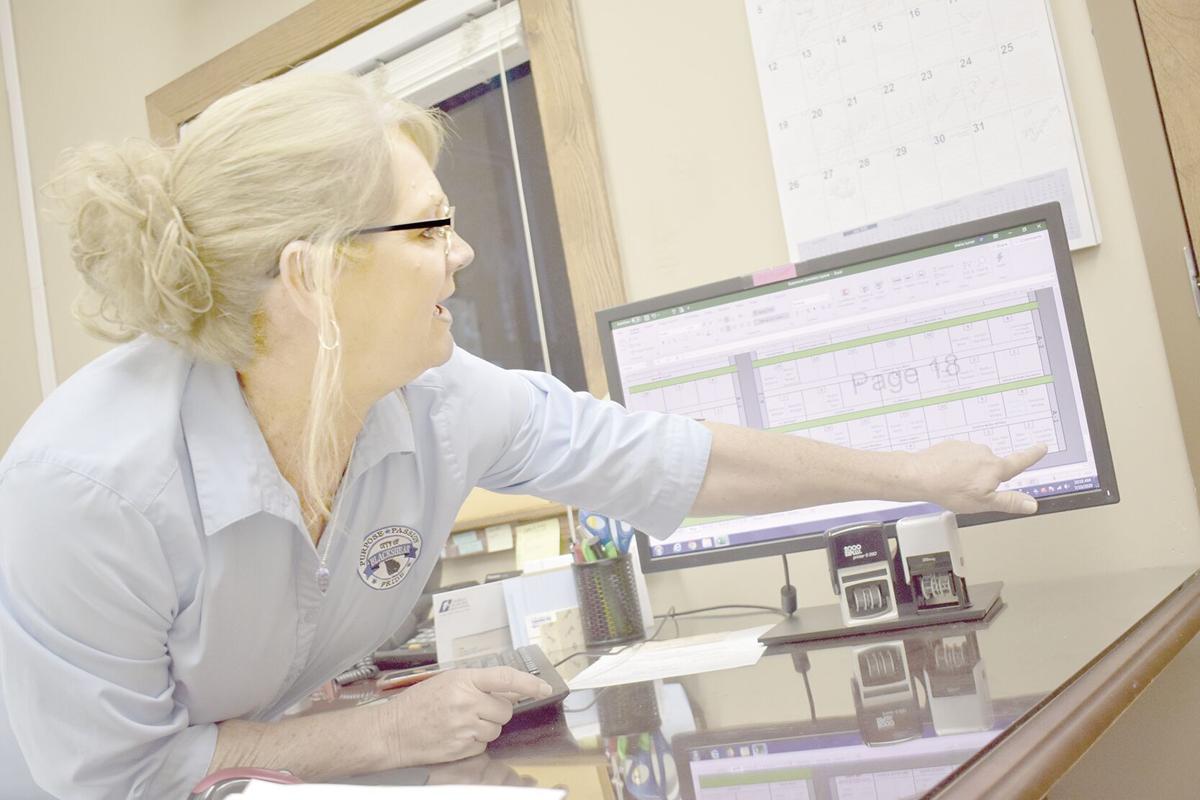 Turner explains how the cemetery mapping database is searchable by name. She can now tell funeral homes where a plot is located or search for a loved one’s grave in minutes.

Shelia Turner, Blackshear Public Works Dept. secretary, points to a brick foundation underneath a concrete slab grave in the city cemetery. When the original red brick grave topper begins to decay, a grave is repaired by pouring a concrete slab over the brick. (The names are intentionally blurred from tombstone.)

Turner explains how the cemetery mapping database is searchable by name. She can now tell funeral homes where a plot is located or search for a loved one’s grave in minutes.

New mapping system will be searchable by family name, made available to the public on city website

Where’s my daddy buried in the Blackshear Cemetery?

City employees haven’t always been able to answer that question  — until now.

Thanks to a year long cemetery mapping project conducted by longtime public works secretary, Shelia Turner, most of the data for the three sections of the city cemetery is cataloged, searchable and will soon be published to the city website, blackshearga.com.

Turner began mapping the city cemetery, searching deed records and city files to locate plot owners and the names of the deceased buried in each plot last June. The project has since become a hobby Turner gets excited to talk about, especially when she solves a mystery like who’s buried in that unmarked grave?

“I just got so into it,” Turner says, laughing. “I even did it on Saturdays and Sundays, not even clocking in, because I got so into it.”

Turner has utilized the online ‘find a grave’ database when city records weren’t sufficient. Sometimes she got lucky. That was the case for a Waycross woman trying to locate her brother’s grave.

A picture of a tombstone under a cedar

tree popped up when Turner searched for the man’s name on findagrave.com.

“We went to every cedar tree and we found it!” Turner recalls. “I called those people and they took me out to eat. They were so tickled.”

The mapping project inspired Turner to research her own ancestral history. She discovered her daughter currently lives in a trailer on land in Brantley County once owned by Turner’s great-great-great-great grandfather. The land was part of his plantation at one time.

The job was hot and messy when Turner first started mapping the cemetery last summer. She’d often return to the office with sweat running in her eyes, her face bright red.

“We walked and measured each spot. We had tape measures dragged everywhere,” Turner says. “I walked for months and months out there.”

Turner then created a map in Microsoft excel based on her measurements and began researching deeds. She recorded plot owners and the names of those buried in each plot in her system, double and triple checking for errors as she input data. Prior to Turner’s mapping of the cemetery, city cemetery records consisted of a filing box of index cards with typed or handwritten info.

“I went through and pulled every one of them (index cards) and got the names and lots,” Turner says.

Now, Turner can search the system by name for folks on the hunt for their family plot or a particular grave. When a new plot sells, she updates the system immediately. She also keeps a paper file for each family with a cemetery plot.

“It took me a long time,” Turner says.

But, she hopes to be caught up with the data entry in just a few weeks  — except for unmarked graves and plots she hasn’t been able to identify yet.

Findagrave.com has helped her fill in missing information where recorded deeds and city records were lacking, but the new system is still missing at least partial information for approximately 30-40 plots in the Park Street cemetery section (the oldest section of the city cemetery).

“That’s the main spot that doesn’t have names,” Turner reports.

Turner estimates there are 50-100 plots throughout the three cemetery sections on Park Street, Bazemore Street and Nichols Street for which she has no record of the plot owner. For another 25 unmarked graves, she has no data, but occasionally a family inquiry will help her fill in missing information.

The oldest graves in the city cemetery date to the 1820s, and for some plots, purchased in the 1930s, Turner can’t track down who currently owns the plot, especially when families have sold off individual burial spots to a close relative as loved ones died through the years.

She encourages families with plot deeds to bring them by her office on Nichols Street so she can update the system.

One woman did just that, trying to locate her husband’s grave so she could give the funeral home information on her own burial plans. Luckily, the woman was listed as the plot owner and Turner was able to locate her husband’s grave  — a previously unmarked stone. The woman recalled a metal plate had been on the grave at one time, but those can be lost easily over time, Turner says.

Turner works closely with local funeral homes, too. Since January, she’s fielded at least 30 calls from people searching for a grave. These days, she’s able to give them an answer more often than not.

Top Tech to Bring With You on Your Next Outdoor Adventure

Ready for adventure? Expand your horizons from home

5 surprising facts about beef and sustainability