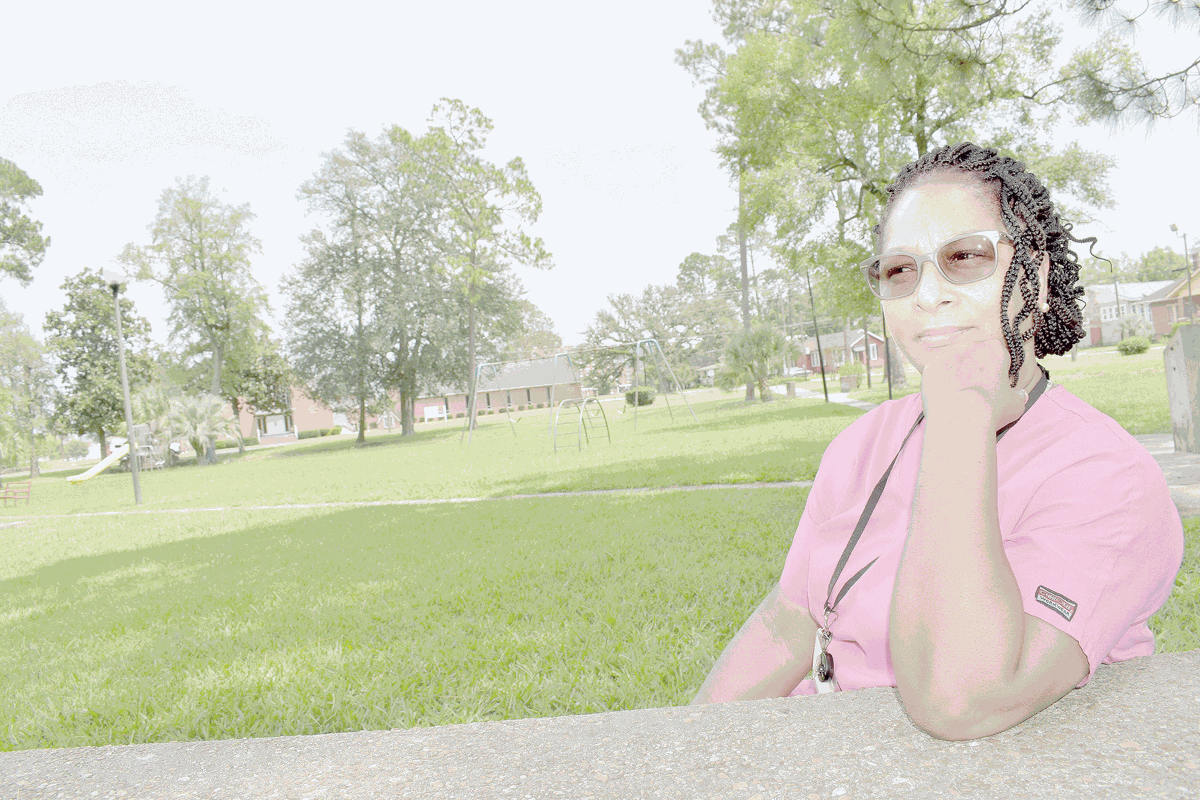 Evelyn Washington was a young, scared mother of two small children with a third on the way when she became homeless years ago. Now she aims to help others in the same situation through her role as a board member of the Okefenokee Alliance for the Homeless. 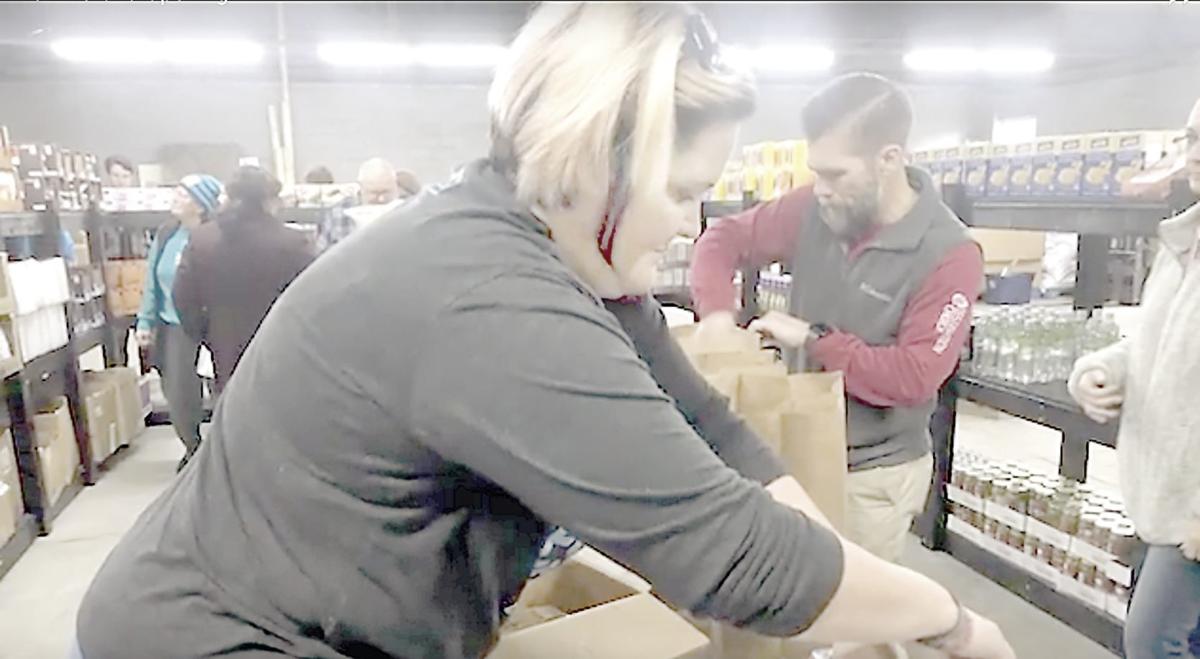 Evelyn Washington was a young, scared mother of two small children with a third on the way when she became homeless years ago. Now she aims to help others in the same situation through her role as a board member of the Okefenokee Alliance for the Homeless.

The city park is clean. There’s no litter or evidence of vagrants sleeping on area park benches, no pop-up tents or hammocks scattered on empty lots or people huddled on downtown corners asking for spare change. There have been no reports of people bathing in the Courthouse fountain either.

Does homelessness exist here in our quaint little community?

Homelessness is a problem most locals don’t see, but those actively working with our community’s most vulnerable population all agree  — the multiple challenges that accompany lack of secure housing is the biggest crisis families in need face here, outranking shortages of food and clothing.

Dixon, who has been at the helm of The Sycamore Tree since its inception eight years ago, expected to feed and clothe folks who had fallen on hard times when she launched the nonprofit. The frequency of housing problems, however, has surprised and perplexed Dixon.

She often feels as though there is no permanent solution to homelessness here.

Leaders at area churches describe the problem as a ‘black hole.’ Churches provide food, pay rent or a utility bill for someone only to hear that another ministry down the road did the same thing a few weeks later.

But, a new alliance recently organized to combat homelessness in Pierce, Ware and Brantley counties has given Dixon hope. She and Pierce County Family Connections Coordinator Stephanie Bell currently sit on the Okefenokee Alliance for the Homeless (OATH) board. The group became legally incorporated, and held their first annual meeting last year, but the idea for such a collaboration was birthed several years ago.

OATH began as a grassroots effort in 2012 when school social workers noticed an upward trend in the number of children across the three counties defined as homeless under the federal government’s McKinney-Vento definition: “Individuals who lack a fixed, regular, and adequate nighttime residence.”

By the McKinney-Vento definition, children who live with someone who does not have custody, stay in a hotel or who sleep on a friend’s couch are homeless.

“There may not be tent camps around town, but there are local children with no sure place to sleep when the sun goes down and that qualifies as  being homeless,” agrees Bell.

School systems monitor McKinney-Vento data annually and submit those numbers to the Dept. of Education. Last school term, 63 students in the Pierce County School System were reportedly homeless. But, that number fluctuates throughout the year as students move around, sometimes in and out of the school system.

“I may mark a student throughout the year as homeless, but because of high mobility rate, the number reported to the state (63) is only the students that were enrolled at the end of the year,” explains Jennifer Johnson, school social worker. “The total number of students for the year was 80 – 74 who were considered doubled up/unaccompanied youth  and six living in hotel/motels.”

OATH, now a collaborative effort with more than 30 church, community organization and agency partners, is  working hard to reduce those McKinney-Vento numbers by connecting homeless individuals with the resources they need and raising community awareness about the ongoing challenges these families face.

The group secured funding through the sale of a home previously donated to the Ware Children’s Initiative and has hired Nikki Spivey as a navigator to connect homeless persons and families with local services that best meet their needs.  (See related story in this week's edition of The Blackshear Times.)

No two situations are the same, Spivey says.

“Each one has a different story to tell on how they got there and how long they’ve been there. Sometimes they don’t even see themselves as homeless,” Bell says.

One month in, Spivey had eight clients. Most of those were referred to OATH by The Sycamore Tree while a few referrals came from area school systems or business owners.

Spivey, who is also the coordinator for DC Downtown Food Ministry in Waycross, meets people where they are, developing a case plan that’s tailored specifically for them. She’s just a call away. And, she has one goal in mind with every case she works  — transitioning her clients to a permanent home.

“We are trying to get these people out of this situation and stabilize the family,” says Gail Seifert, Ware County Family Connections Coordinator and OATH vice-chairperson.

Stabilization is the goal, Bell agrees.

“We’re working on transition, not sheltering … it’ll help the economy in the long run,” Bell says.

“It is a hand up rather than a hand out,” adds OATH Chairman Dr. Glyn Thomas.

OATH has more flexibility to assist families on a case by case basis – providing more tailored assistance and personal interaction than they would receive elsewhere – because the group  is a local nonprofit, not directly associated with state or federal programs.

OATH hopes to raise community awareness of the plight many families face and perhaps erase some of the suspicion and stigma associated with homeless populations  — aiding homeless people won’t draw more to the area looking for a hand out, OATH members say.

“They (the community) don’t need to fear more homeless people coming. In reality, most people are homeless because they won’t leave and go somewhere else,” Bell explains. “This is where their home is so they tend to stay wherever they are.”

The group’s starter money has helped get the program up and running, but OATH will also be seeking financial support from donors in the counties it serves. A fundraising campaign is in the works to help meet OATH’s $50,000 annual budget. Those funds will primarily be used to pay Spivey for her work as a navigator, and to assist with their goal of operating a day center in Waycross where homeless people can apply for jobs, meet with social service providers, take a shower and do their laundry. The OATH day center will also provide homeless individuals with a mailing address. (See related story in this week's edition of The Blackshear Times).

For more information about the services OATH provides or to get a referral form, contact OATH Navigator Niki Spivey at 912-722-0847 or by email to hnspivey@gmail.com. Contributions to OATH can be mailed to P.O. Box 2088 Waycross, GA 31502. All contributions to the 501c3 are tax-deductible.

6 hacks for savvy parents to save time and money

Tips to prepare you and your loved ones for an emergency